TEHRAN, October 28 - Catalan leader Carles Puigdemont, who was sacked by the Spanish government over the region’s declaration of independence, has called for “democratic opposition” to Madrid. 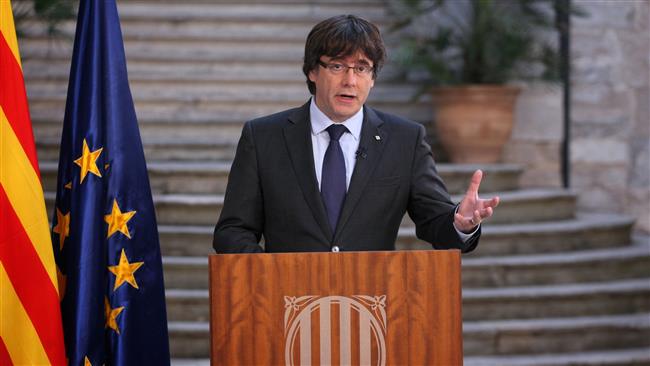 TEHRAN, Young Journalists Club (YJC) - “It's very clear that the best form of defending the gains made up until now is democratic opposition to article 155,” Puigdemont said in a brief statement on Saturday.

"We continue persevering in the only attitude that can make us winners. Without violence, without insults, in an inclusive way, respecting people and symbols, opinions, and also respecting the protests of the Catalans who do not agree with what has decided the parliamentary majority," he said.

The deposed Catalan president further said that he and his team would keep working “to build a free country.”

In a copy of his speech sent to AFP, he signed off as “president of the Catalan government,” implying he still considered himself the head of the autonomous region.

He also called on Catalans to defend the republic proclaimed by the regional parliament.

"We need to keep defending the stage in which we have entered with a tireless sense of civic responsibility and peaceful commitment,” he said, adding that "in a democratic society, only parliaments can pick or dismiss presidents."

The declaration comes nearly a month after Catalonia held an independence referendum on October 1. The Spanish government dismissed the vote as illegal.

On Saturday, the Spanish government announced its decision to invoke article 155, which can, upon application, strip Catalonia of its key autonomous powers and allow the central government to impose direct rule over the wealthy region.

The move by Madrid came after the Catalan parliament voted to declare independence from Spain on Friday.

Soon after the vote, the upper house of Spain's parliament, the Senate, made the unprecedented move of authorizing Prime Minister Mariano Rajoy's government to rule Catalonia directly.

Speaking during a televised speech on Friday, Rajoy said his cabinet had dismissed the regional president and parliament and ordered regional elections to be held on December 21.

Apart from removing the Catalan president, the Spanish premier also fired the region’s police chief and ordered central government ministries to take over the Catalan administration.

Rajoy’s cabinet later convened to adopt the first measures to govern Catalonia directly.
"Exceptional measures should only be adopted when no other remedy is possible," Rajoy said during his speech to the Senate on Friday morning. "In my opinion there is no alternative. The only thing that can be done and should be done is to accept and comply with the law."

Separately on Friday, Spain's constitutional court started a review of the vote held in the Catalan parliament, saying the state prosecutor and other parties had three days to make allegations of wrongdoing, Presstv reported.

A spokesman for Spain's public prosecutor's office said it would file rebellion charges next week against the Catalan leader. A court will then decide whether to accept the charges against Puigdemont.

Catalonia already enjoys a high degree of autonomy, but its drive for independence has its roots in the cultural and political suppression that the region experienced during the 1939-1975 Franco dictatorship.