TEHRAN, October 30 -Somalia's government has removed the country's chief of intelligence and police commissioner, a day after an attack in the capital, Mogadishu, claimed more than 25 lives. 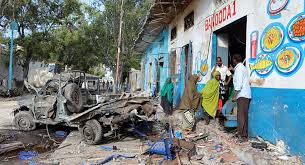 TEHRAN, Young Journalists Club (YJC) -Somalia's government has removed the country's chief of intelligence and police commissioner, a day after an attack in the capital, Mogadishu, claimed more than 25 lives.

The dismissal of Abdillahi Mohamed Sanbalooshe and Abdihakim Dahir Said on Sunday follows the resignation of Somalia's minister of defence and chief of staff of intelligence forces earlier this month, two days before a deadly truck bombing - the worst single attack in the country's history - claimed more than 300 lives.

Mohamed Shire, a security and political consultant, says the government has been unable to stop such attacks due to the "constant change of guard in terms of the Somali security institutions".

The latest attack on Saturday was claimed by al-Shabab, an armed group fighting to overthrow Somalia's internationally recognised government.

It took place in broad daylight after a suicide car bomber drove straight into the Nasa Hablod Hotel, where President Mohamed Abdullahi Farmajo was due to host a meetinglater on Saturday with the leaders of the country's five federal states.

Another vehicle set off explosives at a nearby intersection. The attackers then stormed the hotel and took hostages. It took more than 10 hours for troops to end the siege.

Farmajo was not present in the hotel at the time of the attack.

"Two of the attackers were killed and three others were captured alive after a 10-hour gun battle between our security forces and the terrorists," Abdelaziz Ali, ministry of security spokesperson, said on Sunday.

He added that most of those who were killed were members of security forces.

Mohamed Ahmed, a tuk-tuk driver, told Al Jazeera that he saw a car exploding at the gate of the hotel.

"I was driving a tuk-tuk at the front of the hotel," he said. "I don't know where two of my clients have gone. I don't know if they are dead or alive, but I saw four dead bodies."

Shire, the Mogadishu-based security consultant, described the attacks as "an act of horror" for Somalis and the international community.

"In terms of security institutions, the Somalis are struggling and finding it difficult to cope with the tactics al-Shabab are employing," he told Al Jazeera.

International and regional forces have been helping the Somali government in the fight against al-Shabab for years.

AMISOM is made up of 22,000 troops from several countries in the region and is expected to hand over power to the Somali military by 2020.

The US also has a presence in the country, and has increased the number of drone attacks against al-Shabab.

However, Al Jazeera's correspondent Catherine Soi said that despite constant air raids by US forces in areas still under the group's control, the security of civilians continues to be at stake.