TEHRAN, October 30 -Russia is reportedly considering a partial reduction of its military presence in Syria amid successes of the Syrian government forces in the fight against terrorists. 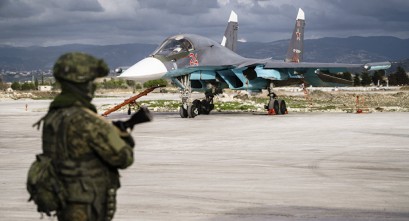 TEHRAN, Young Journalists Club (YJC) -Russia is reportedly considering a partial reduction of its military presence in Syria amid successes of the Syrian government forces in the fight against terrorists.

MOSCOW (Sputnik) — The plan prescribes that only military police units and military advisers as well as a contingent necessary for the protection of facilities in Hmeimim and Tartus will remain in Syria, Russia's Kommersant newspaper reported Monday citing its military and diplomatic sources.

The number of warplanes of the Russian Aerospace Forces in Syria may be also reduced, however the air defense systems protecting the Russian objects will remain in Syria, the sources said.

"In any case [Russian President and] Supreme Commander-in-Chief of the Armed Forces Vladimir Putin will make the final decision," a source told the media outlet adding that no final decisions have been taken so far.

Kremlin spokesman Dmitry Peskov told the media outlet that "such decisions are not being announced."

The Russian Defense Ministry, for its part, has refuted this information and said that there are no plans to reduce the Russian military presence in Syria.

The publication comes amid numerous reports about the successes of the Syrian government's army in the fight against Jabhat Fatah al Sham (formerly known as Nusra Front) and the Daesh terrorist groups.

Earlier, Russian Defense Minister Sergei Shoigu said at a meeting with his Israeli counterpart Avigdor Lieberman that the operation against terrorists in Syria was coming to an end.

On October 24, Shoigu said at the Association of Southeast Asian Nations Defense Ministers' Meeting that Daesh controls less than 5 percent of Syrian territory. According to the minister, since the start of the Russian anti-terrorist operation in Syria, Russian planes have destroyed 948 training camps, 666 plants and workshops producing weapons and 1,500 units of military equipment of terrorists.

Russia launched its military operation in the Arab country on September 30, 2015, at the request of the Syrian government.