TEHRAN, October 30 - The International Atomic Energy Agency (IAEA) once again reiterated Iran’s adherence to the 2015 nuclear agreement with the P5+1 group of countries, stressing that UN inspectors are facing no problems in their verification efforts. 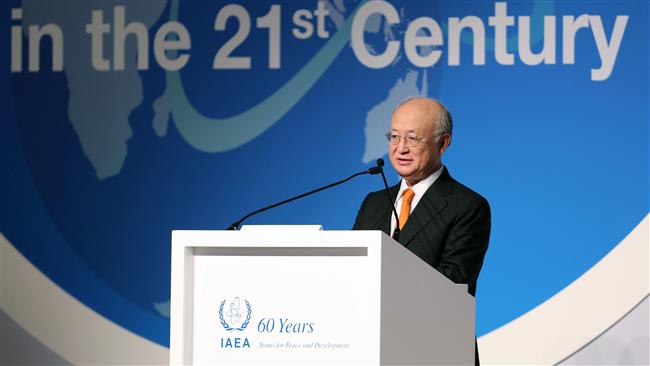 TEHRAN, Young Journalists Club (YJC) - “The IAEA can state that such nuclear-related commitments are being implemented,” the IAEA chief, Yukiya Amano, told a news conference in Abu Dhabi, the United Arab Emirates, on Monday, a day after he met with senior Iranian officials in Tehran.

“I requested that Iran ... fully implement the nuclear-related commitments. This [was] the main thrust of the meeting in Iran... Regarding the activities of our inspectors, they are discharging their responsibility without problem," Amano, whose inspectors are tasked with monitoring compliance with the JCPOA, said.

The Iranian president told Amano that the Islamic Republic sought to boost long-term cooperation with the IAEA and stressed the importance of maintaining the independence and impartiality of the UN nuclear agency.

Rouhani also emphasized the significance of showing respect for international regulations and treaties, saying Iran had repeatedly announced that it would not be the first country to walk away from the landmark nuclear agreement, known as the Joint Comprehensive Plan of Action (JCPOA), reached between Iran and the P5+1 group of countries more than two years ago.

“We will remain committed to the JCPOA as long as we are able to enjoy the benefits mentioned in it,” the Iranian president said.

Elsewhere in his remarks, Amano said he had told Iranian officials that the JCPOA was a “significant gain for verification.”

The US Congress now has less than 60 days to decide whether to reimpose economic sanctions on Tehran that were lifted under the nuclear accord.

The other parties to the accord -- Britain, Germany, France, Russia, China and the European Union -- have all reaffirmed their commitment to it and urged the United States not to back out.

The IAEA is the only official institution in charge of verifying Iranian compliance and it has repeatedly verified Iran’s adherence to its contractual obligations.