Putin: Someone is harvesting Russian bio samples for obscure purposes

TEHRAN, October 31 -Russian genetic material is being harvested all over the country, purposefully and professionally, President Vladimir Putin has said, possibly hinting at the US Air Force's earlier move to acquire Russian tissue samples. 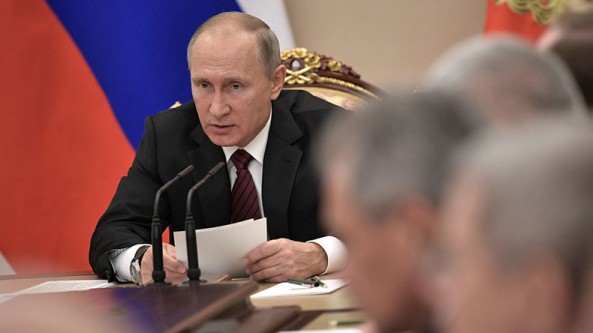 Putin was presiding over a meeting of Russia’s Human Rights Council Monday, when he was informed of live broadcasts from polling stations during the recent regional elections being inundated with foreign viewers.

Council member Igor Borisov said the statistics showed that nearly a million views came from abroad. He hinted at a sinister motive behind those viewings.

“The question is, why so many interested people are watching our elections and, in fact, recording the images of people, and how those images will be used further,” queried Borisov, who is also the chairman of the Russian Public Institute of Electoral Rights.

While his skepticism might be enough to set some conspiracy theorists on edge, Putin followed up with comments that will perhaps push them over.

“Images are one thing, but do you know that biological material is being collected all over the country, from different ethnic groups and people living in different geographical regions of the Russian Federation? The question is – why is it being done? It's being done purposefully and professionally. We are a kind of object of great interest,” Putin told the Council.

He never specified who was behind the shady dealings in Russians' biological samples.

While the Russian president's claims may sound like the stuff from X-Files, it’s actually grounded in fact.

In July, the US Air Force Air Education and Training Command issued a tender on a US government website seeking to acquire samples of ribonucleic acid (RNA) and synovial fluid from Russians.

The listing specified that the samples – 12 of RNA and 27 of synovial fluid – must be provided by Russian donors of Caucasian origin. It also wants information on the donor’s sex, age, ethnicity, weight, height and medical history. Notably, the Air Force said, it would not consider tissue samples from Ukraine.

While such samples might be needed for purely medical research purposes, wanting only Russian tissue samples specifically, is what sent speculations into overdrive.

Is the Pentagon working on a biological weapon to target Russians? Perhaps unlikely speculated Franz Klintsevich, the first deputy chairman of the Federation Council’s Committee for Defense and Security, but adding that it’s a scenario that cannot be totally ignored.

“I’m not saying that it is about preparing a biological war against Russia. But its scenarios, are, no doubt, being worked on. That is to say, in case the need arises,“  Klintsevich wrote on Facebook, referring to Putin’s revelations.

He went on to note that he believes the Russian President’s pronouncement of the practice was for good reason, claiming that although such practices has been well-known, it has taken on a “shameless” scale recently.

“The President’s warning is very timely. Relevant agencies in the West should know that we are aware of their interest,” he said.

Putin himself, however, reassured the Human Rights Council there's nothing to be afraid of.

“Let them do what they want, and we must do what we must,” he stated emphatically.