TEHRAN, November 13 -Yemen’s Houthi rebel government has threatened to sink Saudi coalition warships and oil tankers unless Riyadh lifts its blockade which threatens the lives of millions in the war-torn country. 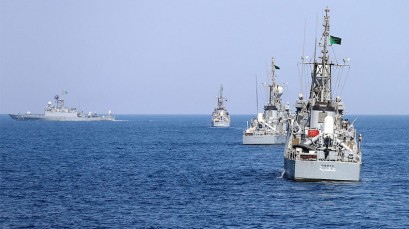 TEHRAN, Young Journalists Club (YJC) -“Battleships and oil tankers of the aggressor and its movements will not be immune from the fire of Yemeni naval forces if directed by the senior leadership,” Al Masirah news cited the country’s navy and coast guard as saying Sunday.

Earlier, Brig. Gen. Sharaf Ghalib Luqman, a military spokesman for the Houthi rebels, said that “systematic crimes of aggression” and the “closure of ports” compels the Houthi forces “to target all sources of funding” of the aggressor. He added the country is ready to “respond to the escalation of the Saudi-US aggression promptly.”
The threat of a military response to the ongoing blockade was made after Houthi leader Maj. Gen. Yousef al-Madani met leaders of the naval, coastal defense and coast guard forces Saturday. That same day, Houthi leader Abdel-Malek al-Houthi posted a message on Facebook assuring that “international navigation will remain safe as it was before,” making clear that “only those who attack our country” will be targeted.

The Saudi-led military coalition announced last week that it was temporarily shutting all of Yemen’s land border crossings as well as its air and sea ports in response to a ballistic missile that targeted Riyadh on November 4. The kingdom accused Houthis of firing an Iran-supplied rocket at the Saudi capital, and responded with bombing raids on the Yemeni capital, Sana’a. Iran has denied allegations that it supplies weapons to the Houthis, but concedes it backs the rebels’ cause.

Following the November 6 closure of all ports of entry into Yemen, a range of UN bodies expressed concern over the fate of civilians in the country, where nearly 7 million people are starving while others depend on humanitarian assistance amidst a deadly cholera epidemic.

“The recent closure of the Yemen's airspace, sea and land ports has worsened the already shrinking space for the lifesaving humanitarian work. It is blocking the delivery of vital humanitarian assistance to children in desperate need in Yemen. And it is making a catastrophic situation for children far worse,” Meritxell Relano, the UNICEF Representative in Yemen said Friday.

Also describing the situation in Yemen as “catastrophic,” a spokesperson for the UN Office for the Coordination of Humanitarian Affairs (OCHA) urged the Saudis to lift the blockade, as up to 90 percent of Yemen’s daily needs are served through humanitarian aid.

“That lifeline has to be kept open and it is absolutely essential that the operation of the United Nations Humanitarian Air Service (UNHAS) be allowed to continue unhindered,” Jens Laerke emphasized.

UN spokesman Stephane Dujarric warned that the Saudi-led blockade “has had a tremendously negative impact on a situation that is already catastrophic.”

Unless Saudi Arabia lifts the blockade, “it will be the largest famine the world has seen for many decades, with millions of victims,” Mark Lowcock, the UN under-secretary-general for humanitarian affairs, warned earlier this week.
The UN Security Council demanded that the Saudi-led coalition keep Yemen’s air and sea ports open to aid deliveries into the country following a session discussing Riyadh’s draconian measures.

The Saudi-led coalition has been waging a military campaign against Shiite Houthi rebels in Yemen since March 2015. According to the latest UN figures, the three-year-old conflict has so far claimed the lives of over 5,000 civilians, in addition to nearly 9,000 people that have been injured.

Share to
Related News
Dozens of Saudi mercenaries killed as Yemeni forces hit base in Ta’izz
UNICEF: Over 5,000 kids killed by Saudi war on Yemen
UN watchdog confirms Iran’s compliance with nuclear deal amid calls to renegotiate P5+1
US Congress introduces bill to end sale of weapons to Saudis over intervention in Yemen
Iran’s exports to Russia up by 36%
Iran naval fleet heads to Cape Town port in S Africa
Tags
houthis ، yemen ، tankers
Your Comment