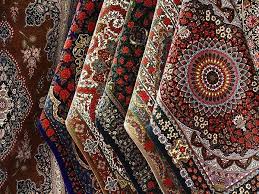 In April, ex-Minister of Industry, Mine and Trade Mohammad Reza Nematzadeh announced that Iran's export of handwoven carpets to the US has increased considerably in the last Iranian year (ended March 20, 2017).

"Iran’s exports of hand-woven carpets to the US stood at $84 million last year showing a significant growth as compared to the figure for the year before which only stood at $2.7 million," FNA quoted him as saying.

The Iranian trade minister reiterated that the unique features of the Persian hand-woven carpet offer great opportunities for sustainable production and employment.

The US, Germany, Lebanon, the UAE, Pakistan, Japan, Britain, Qatar, South Africa and Australia were the top ten costumers of Persian carpet last year with the US taking the lead in imports of the product from Iran.

Carpet-weaving is undoubtedly one of the most distinguished manifestations of the Persian culture and art, and dates back to ancient Persia.

There is an estimated population of 1.2 million weavers in Iran producing carpets for domestic markets and international export.