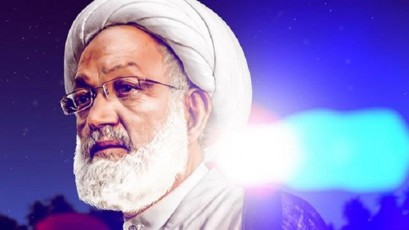 “I issue a call: Sheikh Isa Ahmed Qassim is in danger,” said Sheikh Maytham Salman of the Bahrain Center for Human Rights and the Bahrain Interfaith Center at a news conference in the Lebanese capital Beirut on Thursday, referring to the top cleric’s deteriorating health.

Earlier this week, the UK-based Bahrain Institute for Rights and Democracy (BIRD) reported that physicians who had visited the spiritual leader at his home in the northwestern village of Diraz over the weekend had diagnosed him to be suffering from a “groin hernia requiring an emergency operation.”

Bahraini activists had also reported at the time that Sheikh Qassim, who is believed to be in his late 70s, was suffering constant pain and excreting blood.

“We are looking at a slow murder. What (Qassim) needs is medical treatment and freedom, which are natural rights enshrined in law and the constitution,” added Salman during the presser, calling on the Bahraini regime to lift the siege on the cleric's home village of Diraz.

On June 14, Bahrain’s so-called administrative court ordered the dissolution of the country’s al-Wefaq National Islamic Society and the seizure of its funds after the Bahraini Justice Ministry suspended the opposition group’s activities. Al-Wefaq is the country’s main Shia opposition group and has been spiritually led by Sheikh Qassim.

A week later, the top cleric faced expulsion from Bahrain after authorities revoked his citizenship, accusing him of “illegal fund collections, money laundering and helping terrorism.” They further accused him of using his position to “serve foreign interests” and promote “sectarianism and violence.” He has strongly rejected all the allegations.

Ever since, the public has been staging day-to-day sit-ins in front of his house in Diraz and the government has placed the village under a siege, killing a number of people after attacking the demonstrations in several occasions.

Thousands of anti-regime protesters have held demonstrations in Bahrain on an almost daily basis ever since a popular uprising began in the kingdom in mid-February 2011.

Manama has gone to great lengths to clamp down on any sign of dissent. On March 14, 2011, troops from Saudi Arabia and the United Arab Emirates were deployed to assist Bahraini regime in its crackdown on dissent.