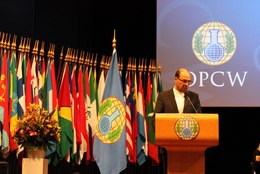 TEHRAN, Young Journalists Club (YJC) - Speaking in the 22nd Session of the Conference of the States Parties to the Chemical Weapons Convention (CWC) in The Hague, he said use of chemical weapons by terrorist groups in Iraq and Syria are real aftermaths of direct or indirect support of certain countries for these terrorist groups.

He called on the member states and secretariat of the Organization for the Prohibition of Chemical Weapons (OPSW) to raise efforts to make other countries and specially Zionist regime, which are not members of the organization although they possess weapons of mass destruction, join the organizations.

He also lauded efforts of Syrian government in destroying chemical weapons despite insecure conditions in Syria, and said, “The Islamic Republic of Iran has helped Syria join the convention and implement international commitments under regulations of the convention.”

“We believe that Syria is victim of terrorism which has been targeted by chemical attacks of Daesh and other terrorist groups.”

He also welcomed completing operation of chemical weapons destruction of Russia and Libya, saying that destroying chemical weapons is the most important commitment of member states to the convention.