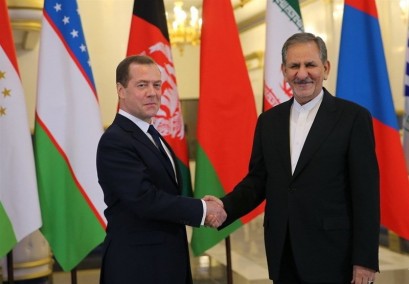 TEHRAN, Young Journalists Club (YJC) - Iran is eager to attract investment from big Russian oil companies, and is ready to cooperate with Russia in the oil and gas industry, Jahangiri said in a meeting with Russian Prime Minister Dmitry Medvedev in Sochi on Friday.

The Iranian vice president is in Russia to attend the 16th meeting of the Council of Heads of Government of the Shanghai Cooperation Organization’s member-states.

Hailing a growth in banking ties between Tehran and Moscow after implementation of the Joint Comprehensive Plan of Action (JCPOA), Jahangiri hoped the two sides would soon begin to use their own currencies, namely rial and ruble, in their trade exchange.

He further praised close cooperation between Iran and Russia in the fight against terrorism as a “successful model” of joint action in the world.

For his part, Medvedev said major Russian oil companies are willing to invest in Iran, saying Moscow has formed a special committee to enhance cooperation with Tehran.

He also reiterated Russia’s backing for Iran’s permanent membership in the SCO, an intergovernmental international organization established in June 2001 in Shanghai by Kazakhstan, China, Kyrgyzstan, Tajikistan, Russia and Uzbekistan.

Since coming into force in January 2016 of the JCPOA, a nuclear deal between Iran and the Group 5+1 (Russia, China, the US, Britain, France and Germany), Tehran and Moscow have ramped up efforts to boost bilateral trade.

Iran and Russia have also formed a strong alliance in recent years, with both supporting the Syrian government against foreign-backed militancy.