TEHRAN, December 1 - Two US lawmakers in Congress are coming under increasing pressure to step down after more women have come forward to accuse them of sexual misconduct. 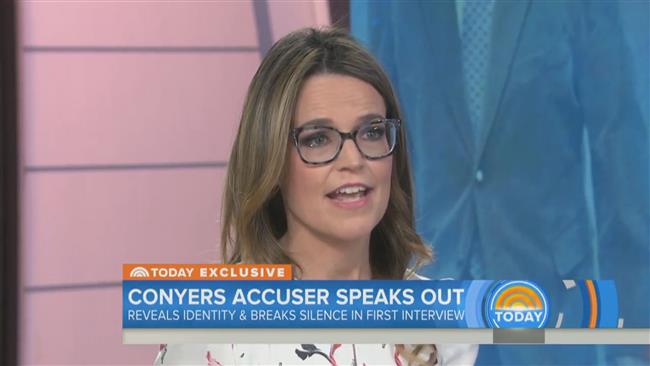 TEHRAN, Young Journalists Club (YJC) - A female war veteran says US Senator Al Franken groped her while she was deployed in Kuwait, and a former staffer for Congressman John Conyers reveals that the longtime civil rights icon "violated” her body and frequently asked her for sex.

US Army veteran Stephanie Kemplin, 41, told CNN that Franken groped her in 2003 before he was in the Senate.

She says the incident took place while she was posing with Franken, who was a comedian then, for a photo in Kuwait, where he was visiting deployed troops.

“When he put his arm around me, he groped my right breast. He kept his hand all the way over on my breast,” she told CNN in a report published Thursday.

“I’ve never had a man put their arm around me and then cup my breast. So he was holding my breast on the side.”

Kemplin estimated that the touching lasted anywhere from five to 10 seconds. She said she eventually turned her body to move Franken's hand off her breast before the picture was taken.

Two other women recently told HuffPost, anonymously, that Franken had touched their bottoms in separate incidents.

Last week, Lindsay Menz of Minnesota accused Franken of inappropriately touching her while posing for a photo in 2010. Prior to that, radio host Leeann Tweeden accused him of groping her and kissing her without her consent during a 2006 USO tour.

A previously unnamed woman who has accused Conyers of sexual harassment came forward Thursday, describing in detail on NBC’s “Today” show how the longest-serving member of Congress groped her and propositioned her for sexual acts.

Brown is one of many women who have alleged Conyers,88, sexually harassed them, which she said occurred regularly during her 11 years working on his staff.

Brown said Conyers’ harassment took place on multiple occasions over the course of multiple years, but that he would often invite her into hotel rooms “with the guide of discussing business” and proposition her for sexual acts. She described one incident, in a Chicago hotel room in 2005, in particular that left her “frozen.”

Conyers has denied all of the allegations against him, but has stepped down from his position as the ranking Democrat on the House Judiciary Committee. He has resisted calls to resign, including some from his fellow members of the Congressional Black Caucus.

House Minority Leader Nancy Pelosi and other leading House Democrats on Thursday increased their pressure on Conyers to resign.

Pelosi's new stance is a stark rotation from her Sunday stance on NBC's "Meet the Press" where she praised the Michigan Democrat as an "icon," questioned who his accusers are, and said the ethics probe should be allowed to go forward.

Sexual allegations against disgraced Hollywood producer Harvey Weinstein have sparked a wave of sexual harassment and assault revelations in various industries, including in the media and politics.

Matt Lauer, one of the most famous TV news anchors in the US, was fired on Wednesday by NBC over an allegation of sexual misconduct, joining the ranks of other titans of American entertainment, journalism and politics who have fallen amid allegations of sexual harassment.