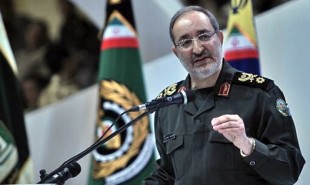 TEHRAN, Young Journalists Club (YJC) - Any demand for negotiation over missile power of the Islamic Republic of Iran is rejected, he said.

He noted that Iran’s high defense power is the key element of deterrence against enemies of the Islamic Republic of Iran and this power would be always developed.

“Our defense and missile might guarantees our security, independence, and diplomatic power and we would never negotiate the issue,” Brigadier General Salami said in a televised interview.

He further pointed to the country’s missiles with a range of 2,000 kilometers and said that Iran has not extended the range of its missiles not due to technological constraints but based on its strategies.

The commander warned, however, that if European countries seek to interfere in Iran’s defense affairs, the country would increase the range of its missiles, according to Tasnim.

Iran has always stressed that its military might and test of missiles is an issue relating to the defense of its territorial integrity and has nothing to do with the JCPOA, the nuclear deal reached between Tehran and the Group 5+1 (Russia, China, the US, Britain, France, and Germany) back in July 2015.

Iran has also underscored frequently that its military might poses no threat to other countries and that the Islamic Republic’s defense doctrine is entirely based on deterrence.