TEHRAN, December 3 - Levan Dzhagaryan, Moscow’s ambassador to Tehran, says that defeat of Daesh in Syria and Iraq sent a “positive image” of Iran to the world.

TEHRAN, Young Journalists Club (YJC) - “Iran was highly criticized (and we know by which countries inside and outside the region) for supporting terrorism. Iran, as a country which is a victim of terrorism, proved that it is against terrorism and is very active in fighting the phenomenon,” he told Tehran Times in an exclusive interview.

Following is the full text of the interview with Ambassador Dzhagaryan:

Q: What message did the recent summit between Iranian, Turkish and Russian presidents in Sochi send to the world?

A: The meeting was very important and some compared it to Yalta. The heads of the three countries took very important decisions to end the war and settle the crisis in Syria politically. We are entering the political phase to settle the Syrian crisis.

Q: How do you think the liberation of the areas held by Daesh in Iraq and Syria has promoted the image of Russia and Iran globally?

A: The last strongholds of the terrorists have been annihilated by the Iranian and Russian forces. It can be said that there are very few regions in Syria which are still being held by the terrorists and hopefully total victory will be achieved in a very short time. And this is a very good opportunity to enter the political phase and reconstruction of Syria’s economy which is very important. These send a very positive image of Iran and Russia to the world. Iran was highly criticized (and we know by which countries inside and outside the region) for supporting terrorism. Iran, as a country which is a victim of terrorism, proved that it is against terrorism and is very active in fighting the phenomenon. We are very happy about the close cooperation between Iran and Russia in fighting terrorism. We should also point to Turkey’s positive role in this respect. Iran, Russia and Turkey guarantee fight against terrorism.

Q: What are the prospects of U.S.-Russia cooperation in the post-war Syria? What about Russia’s cooperation with Saudi Arabia?

A: Russia criticized the U.S. for its suspicious fight against terrorism. We asked them: how are you fighting terrorism without receiving a response? However, the U.S. and Saudi Arabia play important role and we should cooperate with them. We held talks with the U.S. on easing tension in southern parts of Syria, and the U.S., Russia and Jordan reached an agreement on the issue. Prior to the Sochi meeting Mr. Putin held talks with Mr. Trump, the Saudi Arabian King [Salman bin Abdulaziz Al Saud], the Emir of Qatar [Tamim bin Hamad Al Thani] and the Israeli Prime Minister [Benjamin Netanyahu]. Russia is very transparent.

Q: U.S. troops are in Syria without the permission of the Syrian government. What is your opinion about that?

Q: Don’t you think the U.S. sought tried to disintegrate regional countries during the mayhem in the region?

A: We have always said that the Syrian crisis is rooted in the year 2003 when the U.S. invaded Iraq without permission of the UN Security Council. The U.S. cannot argue about that because the invasion was illegal and a clear violation of (international) law. The U.S. should be blamed for what is going on in the region. The U.S. is a very important country and we should cooperate with it, but it does not mean that we accept leadership of the United States. American-led coalition in Syria is unacceptable. Cooperation should be equal. Once again I stress that definitely we do not accept the U.S. leadership. 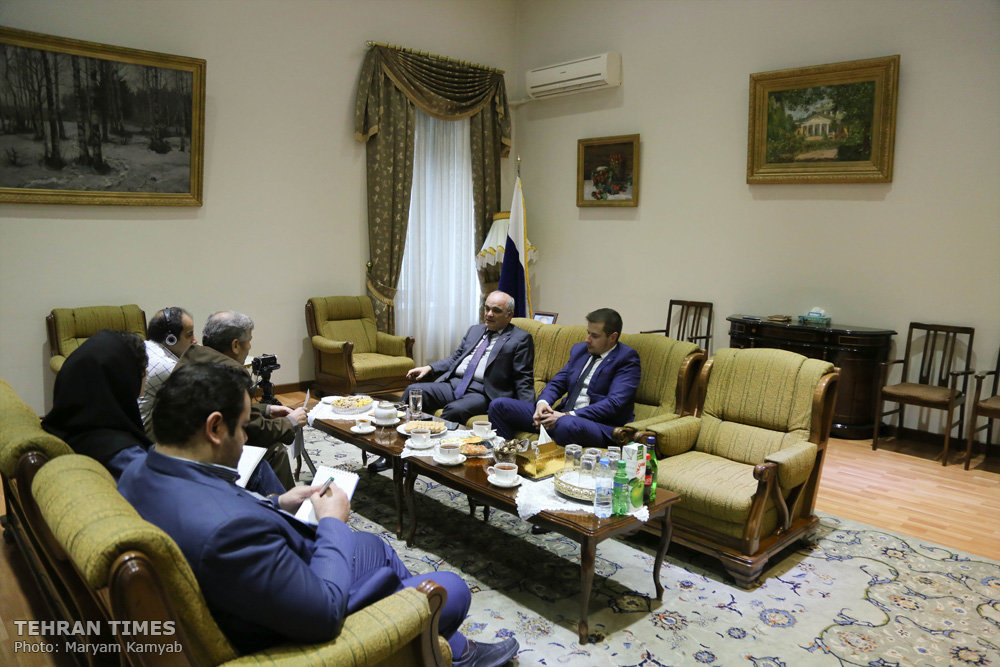 A: It is the Syrians who should decide in this respect. We proposed and Iran and Turkey have supported that a national dialogue should be held in Sochi and representatives from various layers of the Syrian people should attend to discuss the future of Syria. A committee should be formed to decide on the Syrian constitution, and after that an election should be held under supervision of the UN without foreign interference and also Syria’s territorial integrity should be protected.

Q: There is a view that certain countries, which helped create terrorism and extremism through their actions and ideologies, intend to provoke terrorism in certain big countries like Russia and China. What is your opinion?

A: We have this bitter experience in North Caucasus during 90s, terrorists who were fighting against the Russian government received help from some foreign countries. So, we prefer to counter terrorists from Russia or Central Asia in Syria to prevent them from returning Russia and continue their terrorist activities there like terrorist attack on Saint Petersburg metro which left many innocent people dead. So, we continue this fight against terrorism through legal actions.

Q: How do you think the ideology of Daesh should be countered?

Q: Since 2014 when the Ukraine crisis started, NATO has been creating negative atmosphere against Russia. How do you assess such propaganda?

A: We evaluate the acts as very negative, however, they will not succeed. It is not the first time that NATO spreads negative propaganda against Russia. Russia is powerful militarily and has nuclear weapons and can defend itself. So, such propaganda reached nowhere. However, we have announced that we are ready to cooperate.

Q: It has been proposed that Iran and Russia trade in national currencies. Have any step been taken in this respect?

A: It is a very good idea. The two countries’ top central bank officials have held meetings in this respect. The 14th joint committee will be held in two months and I hope that this issue will be discussed.

Q: Mr. Ambassador, let’s turn to relations between Moscow and Tehran. Please explain can Iran and Russia be trusted friends and allies?

A: It has been 515 years that Iran and Russia have diplomatic relations. There are many pages in history of the ties between the two countries. We should have a view on future. The two countries have settled many issues such as the Bushehr nuclear plant and the S300 missile system. The Russian and Iranian forces have been killed in Syria to serve one goal which was fighting terrorism. All of these show that Iran and Russia can be united against the common enemy and challenges. The top officials’ visits show that there are good relations between the two countries’ officials and there is the political determination to move forward.

Q: How do you describe ties between Tehran and Moscow in a few words?

A: ‘Very excellent’. As ambassador I am very happy to say it. I am just worried about one thing which is lack of efforts to use all capacities in both countries to expand relations. However, I am very satisfied with relations in tourism.