TEHRAN, December 3 - Mr. Peña Nieto agreed to the creation of an anti-corruption commission last year, but its members say they have been stymied. 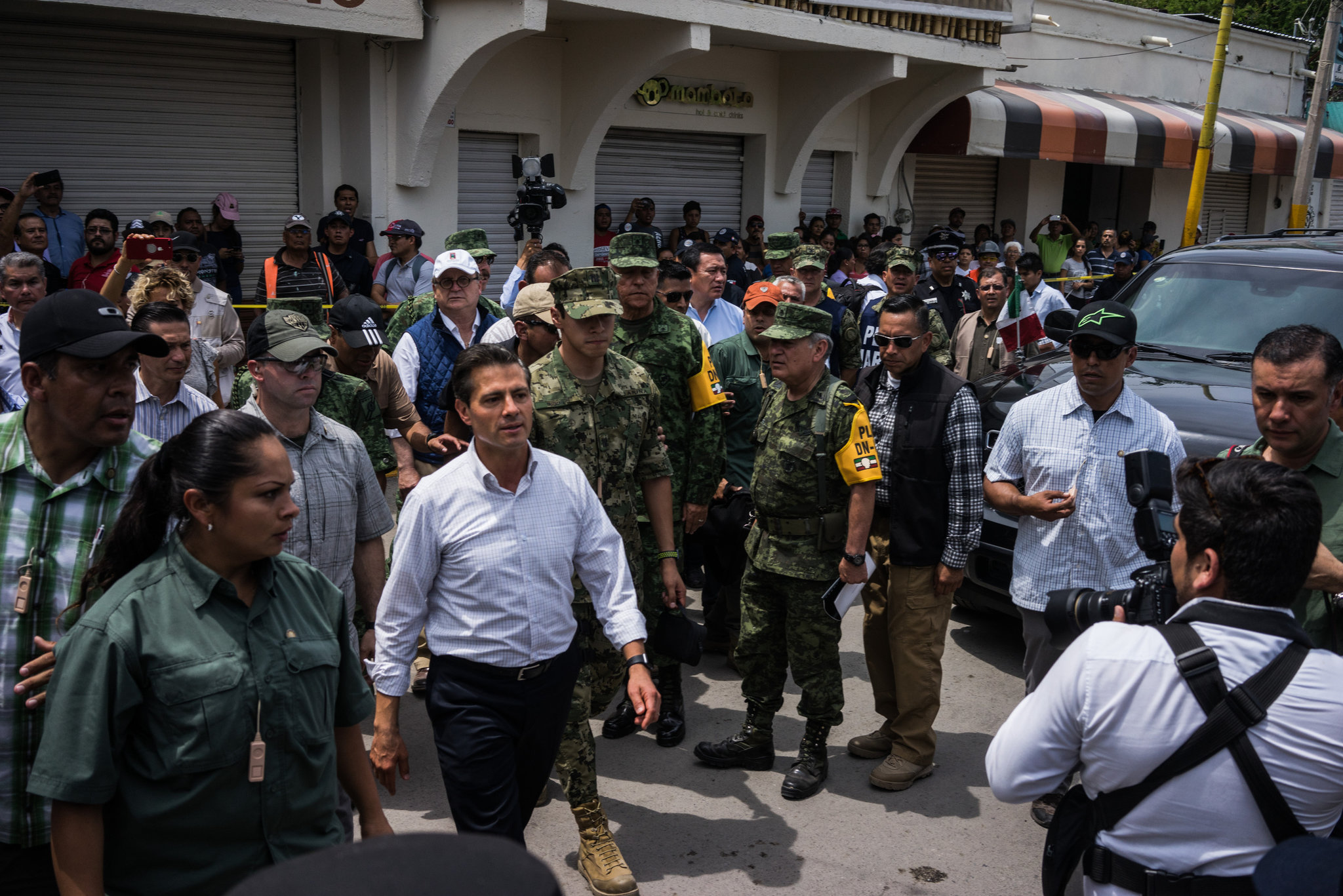 TEHRAN, Young Journalists Club (YJC) - Mexico’s landmark anti-corruption drive, inaugurated by President Enrique Peña Nieto under intense pressure to answer the scandals jolting his administration, is being blocked by the government’s refusal to cooperate on some of the biggest cases facing the nation, according to members of the commission coordinating the effort.

Attempts to look into the use of government surveillance technology against civilians, the embezzlement of tens of millions of dollars through public universities and allegations of widespread bribery to win construction contracts have all been thwarted, commission members say.

Marred by scandals that have embroiled his administration, his allies and even his own family, Mr. Peña Nieto agreed to the creation of a broad anti-corruption system last year that was enshrined in the Constitution, a watershed moment in Mexico.

But after nine months of pushing to examine the kind of corruption that ignited public outrage and brought the new watchdog into existence, some of its most prominent members say they have been stymied every step of the way, unable to make the most basic headway.

After announcing the new system with great fanfare, they say, the government is now refusing to allow any serious investigations into its actions.

“They are panicked that maybe we will go too hard and unravel something, find individuals responsible for corrupt acts,” José Octavio López said. He worked in the administration the last time Mr. Peña Nieto’s party held the presidency, in the 1990s, and is now part of the new National Anti-Corruption System.

“They are used to appointing someone they control,” Mr. López said of the government. But when officials learned that he and others on the new commission wanted to act with impartial independence, he added, “they didn’t like that.”

The effort started more than a year ago, when advocates presented the government with hundreds of thousands of signatures backing a nationwide campaign to combat corruption. The president, facing tough questions about his administration and personal conflicts of interest, including his wife’s purchase of a multimillion-dollar custom home from a major government contractor, conceded.

In principle, regular citizens are at the helm of the new system, giving them the power to ensure that it works in the interest of the Mexican people, not the government.

But in interviews, all five members of the special citizen commission recited a long inventory of obstacles placed before them by the government.

None of the 18 judges who are supposed to oversee anti-corruption cases have been appointed by lawmakers. The prosecutor empowered under the new system to pursue investigations independently has not been named. And members of the citizen commission say they have been routinely shut out of discussions about big corruption cases.

“It is a bad joke,” said Luis Manuel Perez de Acha, a tax lawyer on the commission. “I was naïve when the system launched. I believed and had hope that it would work.”

“I know now that they are trying to sabotage everything we do,” he added.

A big part of the problem, the commission members contend, is that their power is rooted in title only. All significant decisions have to be made by a collection of seven agencies. But six of them come from different branches of government, leaving the citizen’s commission, which technically oversees the entire process, heavily outvoted.

“I’ve been given all the responsibility, with none of the power,” said Jacqueline Peschard, the president of both the citizen commission and the overall anti-corruption system.

The government strongly denies the allegations, saying that it has fully supported the commission members and that they have misinterpreted their mandate.

The citizens involved in the process are not supposed to investigate corruption, the government says. Rather, they are there to help set policy and coordinate the various authorities who have the legal responsibility of prosecuting crime.

But Mrs. Peschard and other members say they have been prevented from doing exactly that because information is regularly withheld from them, like when they tried to discuss the hacking scandal that has engulfed Mr. Peña Nieto’s administration this year.

Sophisticated spying technology sold to the Mexican government for the purpose of tracking terrorists and criminal networks has instead been deployed against dozens of journalists, academics, human rights lawyers and anti-corruption advocates, a potential violation of Mexican law.

But when Mrs. Peschard and others called for a simple briefing on the issue, she said she was voted down by every representative of the government agencies.

One of the representatives voting on whether to discuss the hacking scandal was Arely Gomez, the attorney general in office when the government was using the surveillance technology.

“I would say there is in fact coordination on the committee,” Mrs. Peschard said with a dry laugh. “It’s them against me.”

In a statement, Mr. Peña Nieto’s office acknowledged that any “illegal intervention of communications” is widely viewed as a pressing issue. But, it said, Mexican law does not treat spying as a “corruption crime,” so government representatives had argued that it should not be handled within the new system.

Mrs. Peschard and other commission members say they have tried, unsuccessfully, to check on other cases that have raised troubling questions for the Mexican public.

Last December, the United States Department of Justice announced that Odebrecht, the Brazilian construction behemoth accused of paying nearly $800 million in bribes to government officials across Latin America, had given about $10.5 million in “corrupt payments” to Mexican officials to win public contracts. The department said $6 million of that money had gone to a single “high-level official of a Mexican state-owned” company.

Mr. Lozoya has denied any wrongdoing.

Deepening the intrigue, the government fired a Mexican prosecutor who had been looking into the use of illicit money in the president’s campaign — just days after the prosecutor said that Mr. Lozoya had secretly pressured him to be cleared of any wrongdoing.

Mrs. Peschard and other commission members said they repeatedly asked for briefings on the matter. The government denied that any such request had been made. But in separate interviews, several commission members cited letters they had sent to the attorney general’s office requesting an update on the case.

Each time, they said, they were told there could be no briefing because an investigation was underway, prompting them to wonder how they could do their jobs if sharing information about investigations was prohibited.

After consistently being blocked, Mrs. Peschard and the others decided on another approach. When local news reports revealed that nearly $200 million had been embezzled through the nation’s public universities, the commission sent requests to 99 government departments, asking for the information directly.

Only one government agency has responded so far.

In another instance, the commission tried to establish a single account to disburse money for earthquake victims — to ensure that the funds could be rigorously accounted for. Once again, it was told to stand down.

Since the commission is not technically part of the government, the president’s office says, it cannot coordinate government resources.

For many Mexicans, the new anti-corruption system — and particularly the power of citizens to coordinate it — showed that the government, when pushed hard enough, might finally combat the impunity that defines much of life in Mexico.

But many civil society leaders, including some who helped engineer the creation of the anti-corruption system, say they have fallen prey to a familiar trick: The government creates a panel to address a major issue, only to starve it of resources, inhibit its progress or ignore it.

Juan Pardinas, a chief architect of the anti-corruption system, says now that it is “basically broken.”

“The Mexican government feeds us placebos and we believe they will cure us,” said Juan Pardinas, the president of the Mexico Institute for Competitiveness and one of the chief architects of the anti-corruption system. “I drank the Kool-Aid and I passed the jar to a lot of people, believing it was a path to change.”

Mr. Pardinas has been one of the most prominent public voices fighting corruption, its corrosive effect on democratic institutions, and the lives it sometimes claims. He ultimately became a target of the spying technology purchased by the Mexican government to surveil criminals and terrorists.

“I killed myself for three years to achieve this, and it’s basically broken,” he said of the anti-corruption effort. “Well, maybe the system isn’t broken. It’s actually working perfectly to allow impunity.”

The anti-corruption drive is still missing its independent prosecutor, arguably the most important person in the entire operation. The selection has been frozen in the legislature, which was already up in arms over the president’s contentious choice for attorney general: Raúl Cervantes, a close ally of Mr. Peña Nieto and the main lawyer for his party during the 2012 campaign.

After a long battle in Congress — and news articles about properties and a Ferrari owned by Mr. Cervantes, registered outside of the capital to avoid higher taxes — his name was withdrawn.

Beyond that, many Mexican states have still not enacted the mandatory systems meant to duplicate the federal anti-corruption effort on a local level.

One of the commission members, Mr. Perez de Acha, says he has sued the states that have not set up their anti-corruption systems, which were supposed to be in place by July 19. He has also sued the Senate to force the appointment of the 18 anti-corruption judges.

“We can’t sit with our arms crossed,” he said. “We have constitutional legitimacy.”

“I’m not going to give up,” said one of them, Mariclaire Acosta. “There is no quick fix here.”