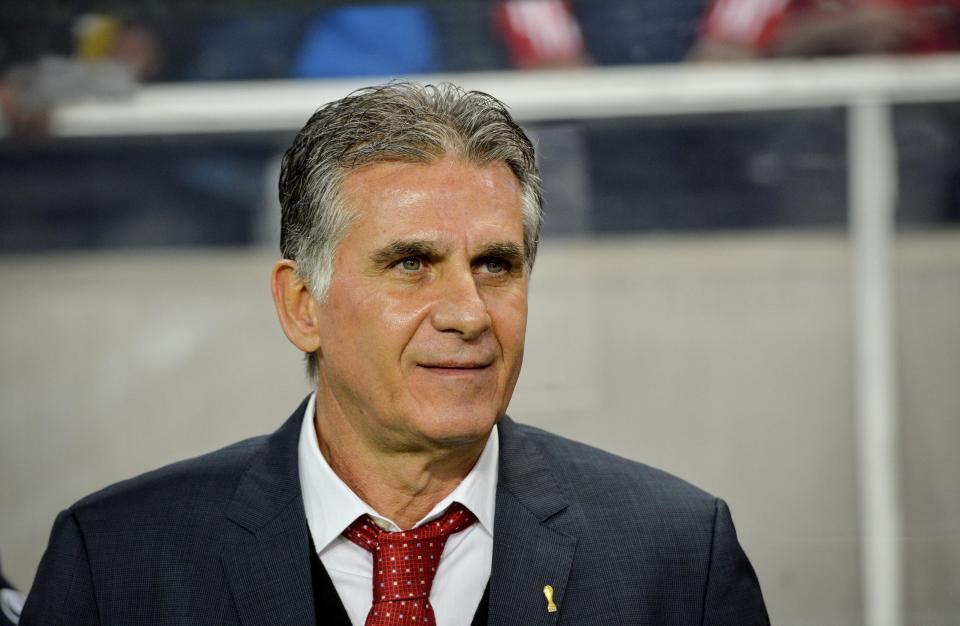 Carlos Queiroz has been in charge of Iran since 2011

But this World Cup, he will be hoping to lead Iran to new heights.

Who is Carlos Queiroz?

After a spell with Portugal Under-20s, he was appointed boss of the full national team in 1991, where he remained for two years.

Following spells in the Middle East, Japan and the United States, Queiroz led South Africa to an impressive performance at the 2002 World Cup where he caught the eye of Sir Alex Ferguson.

A year later he was on the more again to take over as manager of Real Madrid, but he ultimately ended up sacked and returned to United for a second, four-year spell as Fergie's assistant.

He then took over Portugal in 2008 and remained in the job until 2010 when they were knocked out of the World Cup by Spain.

Why is Carlos Queiroz managing Iran?

Queiroz has not touched upon his reasons for taking up the manager's role with Team Melli but has struck up a fantastic bond with the fans since his appointment in 2011.

The Portuguese boss had a fantastic reputation as a coach at the time, but there were question marks over his managerial ability after unsuccessful spells with Real Madrid and Portugal.

But now he is arguably the most sought after boss in Asia after leading the Iranians to two consecutive World Cups.

He reportedly earns £1.5m-a-year in his role as Iran manager.

What impact has Carlos Queiroz had in his six years with Iran?

On a personal level, Queiroz's lengthy stint with the Iranians has been turbulent, with the 64-year-old having resigned four times and once been held in the country due to alleged unpaid taxes.

That contrasts starkly with the discipline of his team, who are the most solid defensive unit in Asia by a distance.

Under Queiroz, Iran conceded just two goals in their World Cup qualifying group, which both came in their final match against Syria after they had already qualified.

That followed their performance at the 2014 World Cup where they held Nigeria to a goalless draw and were unlucky to lose in the last minute to a Lionel Messi wondergoal against Argentina.

Queiroz has also focused heavily on attracting players of Iranian ancestry from outside Iran to play for the national team, including players who do not speak Persian.

According to the latest update of FIFA World Ranking, released November 23, Iran national football team holds its first Asian ranking place and climbed up two steps in the world list to sit at 32nd spot.

Under the management of Portuguese coach, Carlos Quiroz, Team Melli achieved the spot with 798 points in global FIFA ranking after friendlies held with Panama, Venezuela, Togo and Russia in which Iran gained three victories and one draw.

Iran shares the 32nd spot with Scotland and Republic of Ireland, having the same points as Iran. Team Melli’s best rank in the list goes back to 2005 when Iran came in 15th.

In the Asian Ranking, Australia holds the second place with 747 points and climbed four steps up to get the 39th place globally. Japan, South Korea and China are in the third to fifth places in Asia respectively.

The first spot in the FIFA World Ranking is taken by Germany with 1602 points and a relatively high difference with Brazil in second spot with 1483 points.

Portugal, Argentina and Belgium enjoy their third to fifth places in the ranking with 1358, 1348 and 1325 points relatively.

Spain the 2010 World Cup winner climbed up the ranking ladder two steps to conquer the sixth place with 1231 points.

With only a few days before the World Cup final draw, December 1, each participating nation is speculating about the possible results and the teams they will be playing with in the group stage.

Iran is placed in the third pot above all other four Asian teams present at the tournament (Japan, South Korea, Saudi Arabia and Australia are all in pot 4).

It is also one level above the previous four World Cup pots for Iran. Remaining as the top Asian team in the past years, keeping an unbeaten record since March and being the third team to qualify for the 2018 World Cup after the host country Russia and Brazil, can account for the reasons Iran has ended up in pot 3.

Therefore, only 20 teams remain and three among them will share the same group with Iran.

According to Varzesh3.com, among Russia, Germany, Brazil, Portugal, Argentina, Belgium, Poland and France in pot 1 only one team would be in the same group with Iran. Following 1-1 result of Iran and Russia in a friendly match recently, the host country will be the best choice for Iran among others. Iran has previously played against Germany, Portugal and Argentina and lost to them. Belgium, Poland and France are also very strong teams Iranian players prefer not to confront.

In pot 2 are national teams of Spain, England, Columbia, Uruguay, Mexico, Switzerland, Croatia and Peru. Regarding the good encounter of Iran with South American countries like 1-0 loss to Argentina by Messi’s goal in the final minute at the previous edition of the World Cup, South American competitors like  Columbia, Peru and Mexico would be better rivals for Iran.

As mentioned before, four Asian countries are placed among the teams in pot 4 which will not be drawn in the same group with Iran. The rest in pot 4 includes Panama, Morocco, Nigeria and Serbia.

Considering Iran’s recent friendly against Panama in which Team Melli overpowered its rival 2-1, Panama can be the best option among others.

Serbia has shown good results in World Cup qualification games and achieved the direct quota for the tournament. Nigeria is among the strongest teams in Africa with a good performance in the qualification matches.

Iran’s best possible group in the upcoming World Cup would include Panama, Columbia and Russia. If drawn in the same group, Iran will have the highest chance to qualify for the next stage of the tournament, and enter the round of 16 for the first time in its World Cup history.

On the Other hand, Nigeria, England and Brazil would form the deadliest group for Iran and it will make passing through this group stage extremely difficult for Team Melli.