TEHRAN, December 4 -Tensions simmer on the Korean peninsula as Pyongyang describes the US and South Korea's largest ever aerial drills as an "all-out provocation." 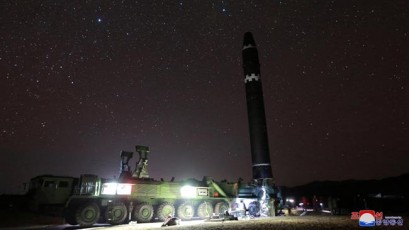 TEHRAN, Young Journalists Club (YJC) - Tensions simmer on the Korean peninsula as Pyongyang describes the US and South Korea's largest ever aerial drills as an "all-out provocation."

The five-day Vigilant Ace drill kicked off on Monday five days after the North tested an intercontinental ballistic missile said to be capable of hitting the US mainland.

"The US and South Korean puppet warmongers would be well advised to bear in mind that their DPRK-targeted military drill will be as foolish as an act precipitating their self-destruction," said the North's ruling party Rodong newspaper on Sunday.

The article was published on day after a North Korean Foreign Ministry spokesman said that US President Donald Trump and his administration are "begging for nuclear war.”

Around 230 aircraft including F-22 Raptor stealth jet fighters are taking part in the drill which also includes F-35 fighters and some 12,000 US service members.

On Wednesday, Pyongyang test-launched its “most powerful” ballistic missile following a two-month lull in missile tests.

The Hwasong-15 missile flew higher than any other missiles launched by the North ever, according to North Korean state media, which also said the missile ended up landing in Japanese waters after traveling 960 kilometers and reaching the height of 4,500 kilometers.

The test triggered a UN Security Council meeting in which the US ambassador to the United Nations threatening to “utterly” destroy the regime if war breaks out.

"The dictator of North Korea made a choice yesterday that brings the world closer to war, not farther from it," said Nikki Haley. "If war comes, make no mistake: The North Korean regime will be utterly destroyed."

North Korea says it needs to develop its missiles and nuclear weapons as a deterrent against hostility by the US and its regional allies.