TEHRAN, December 4 - Israel’s Prime Minister Benjamin Netanyahu has called on the “policy community” in the United States to push decision makers in Washington and European countries to revise the 2015 nuclear agreement with Iran. 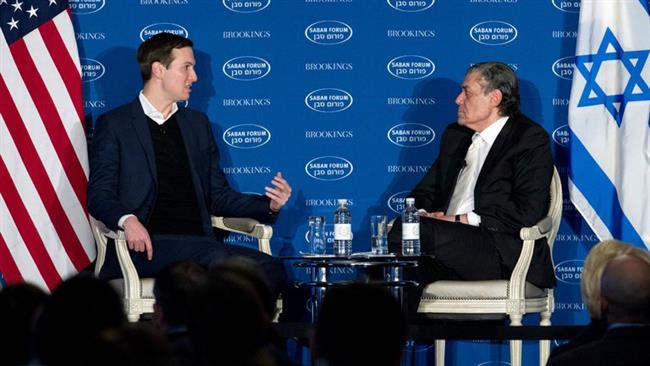 TEHRAN, Young Journalists Club (YJC) - “I urge you, in the policy community, to help decision makers in the capitals of Europe and Capitol Hill, to take advantage of this opportunity,” the Israeli premier said.

By the "policy community", the Israeli leader apparently means powerful lobbyists such as the Israeli American Council and the American Israel Public Affairs Committee (AIPAC) which are central to all anti-Iran motions.

Netanyahu, whose regime is believed to possess the only nuclear arsenal in the Middle East, has repeatedly made unfounded accusations that Iran was seeking to develop nuclear weapons.

His new call came in a taped message that focused primarily on Iran to the Brookings Institute – Saban Forum meeting in Washington.

The annual conference is funded by the Israeli-born business mogul Haim Saban who said in November 2014 that "I would bomb the living daylights out of these [expletive],” if former US President Barack Obama struck a “bad deal” with Iran and Netanyahu assessed it as putting Israel at risk.

American Jewish billionaire Sheldon Adelson, a powerful casino magnate and another funder, suggested then that the US detonate a nuclear bomb in the Iranian desert before negotiations with Tehran.

Netanyahu hailed President Donald Trump for refusing in October to certify the Iran deal, known as the Joint Comprehensive Plan of Action (JCPOA).

The Israeli premier said the decision “has created an opportunity to fix the great flaws” of the JCPOA after the US president warned he might ultimately terminate the agreement.

Trump is required by law to certify every 90 days whether or not Iran is complying with the nuclear deal. If he argues that Iran is not in compliance, that could cause an American withdrawal from the international pact.

While Trump did not pull Washington out of the nuclear deal in October, he gave the US Congress 60 days to decide whether to reimpose economic sanctions against Tehran that were lifted under the pact.