Houthi: We managed to thwart major threat to Yemen’s security

TEHRAN, December 4 - Leader of Yemen’s Ansarullah movement, Abdul-Malik al-Houthi, says the movement has managed to thwart a major threat to the country’s security by defeating the plot hatched by former president, Ali Abdullah Saleh, and his forces. 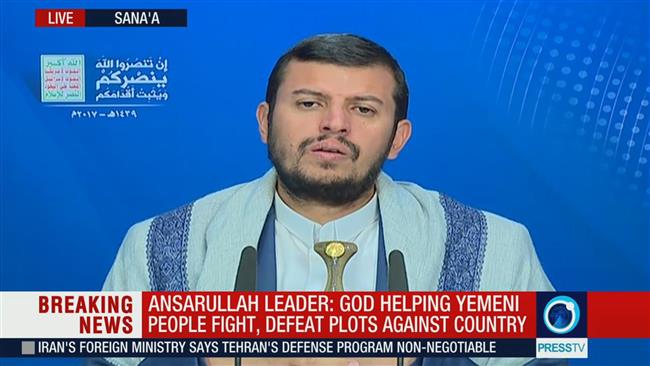 TEHRAN, Young Journalists Club (YJC) - He added that despite his early pretense about being opposed to Saudi aggression, Saleh finally changed course and took sides with the aggressors.

Noting that everybody was taken by surprise by Saleh’s sudden change of course, Houthi noted that the fighting in the capital Sana'a in past days had worried people about security and unity in the country.

After they revealed their new position, Houthi said, we asked them to stop their warmongering and criminal activities and told them this was the wrong course that they had taken.

Houthi added, “However, they declined our request and continued with their wrong pro-Saudi approach and ended up with blocking the capital’s streets.”

“They intended to do the same in other provinces and cities … but today, this plot was defeated very quickly,” he said.

Noting that recent positions taken by Saleh were openly in favor of Yemen’s enemies, the leader of Ansarullah said Saleh’s positions, which were backed by a united media front of the enemies even took members of his own party by surprise.

Houthi said there was coordination between Saleh’s militia and the Saudi-led coalition, which provided them with air support in order to conquer Sana'a and end the war in Yemen in their favor.

He added that the aggressor forces also imposed a tight blockade on the Yemeni people in order to undermine the nation’s resistance and pave the way for victory of Saleh’s forces.

Houthi noted that the Muslim people of Yemen and their resistance and support for the Houthi fighters were the main factors that helped Yemeni forces defuse aggressors’ conspiracy.

Referring to the failure of efforts made by Saudi Arabia and its allies, including the United States and the UK, he said, “They are consumed by their anger and we tell them die of your own anger,” because whatever you do will make the Yemeni nation more resistant and vigilant.

Houthi stated that despite all enemies' plots, the Yemeni nation will continue to become more resistant and stronger, and other enemies must learn a lesson from the failure of Saleh’s plot in Sana'a.

He also called on all political forces in Yemen to remain united and form a single front to defend the country’s freedom and independence and defeat the enemy’s plots.

He emphasized that the Houthi Ansarullah considered members of Saleh’s General People's Congress (GPC) as their brothers, most of whom cooperated in defending the country against the aggressors.

He warned against any act of retaliation against members of the GPC, noting that Ansarullah movement would not allow such moves, which seek to create rifts among the nation.

Elsewhere in his remarks, Houthi referred to firing of a cruise missile by the Yemeni forces at a nuclear installation near the United Arab Emirates (UAE) capital of Abu Dhabi on Sunday, saying, “We showed them that they must not underestimate our capabilities.”

The Houthi leader also advised all foreign companies working in Saudi Arabia and the UAE to leave those countries for the lack of security due to “our missile” power.

He also urged potential foreign investors to invest instead in Oman, Kuwait and even in the Yemeni capital if they sought more security for their investments.

The Houthi leader further warned that as long as Yemen was not safe from their aggression, Saudi Arabia and the UAE would be targets for Yemen’s long-range missiles.