TEHRAN, December 4 - A source close to the Syrian government said Damascus is still unsure whether to participate in the eighth round of the UN-mediated peace talks in Geneva. 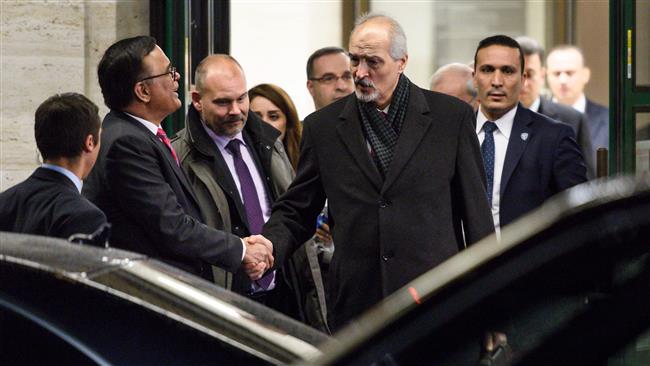 TEHRAN, Young Journalists Club (YJC) - “For the time being there has been no final decision. Damascus is still thinking about the feasibility of its participation,” the government source, speaking on condition of anonymity, told AFP on Monday.

"As soon as a decision is reached, it will be made public through the usual diplomatic channels," he added.

Bashar al-Ja'afari, Syria's UN ambassador and chief negotiator, told reporters in Geneva on Friday that his team would fly back home and that "Damascus will decide" whether they would return to the UN-backed talks, which are to be resumed on December 5.

Ja'afari said there were "big problems in this round of talks," pointing to a last month statement released by the opposition insisting that Syrian President Bashar al-Assad should step down before any peace deal can be reached.

"The language was provocative, irresponsible politically speaking," the Syrian government's chief negotiator said, warning that if the opposition delegation sticks to such language "there will be no progress."

Previous rounds of negotiations over the past five years have failed to achieve a tangible result, mainly due to the opposition’s insistence that Assad should cede power.

That condition seems no longer tenable due to Syria’s continued victories against foreign-backed militants in the recent past.

Russia, along with Iran and Turkey, has been mediating a parallel peace process between Syria’s warring parties in Astana, Kazakhstan, since January.

In a meeting with Russian President Vladimir Putin in the Black Sea resort of Sochi on November 20, Assad said he was “ready for dialogue with all those who want to come up with a political settlement.”

Moreover, Russia plans to hold an all-Syrian congress, known as the Syrian National Dialog Congress, in Sochi, which would involve drawing up a framework for Syria’s future structure, adopting a new constitution and holding elections under UN supervision.