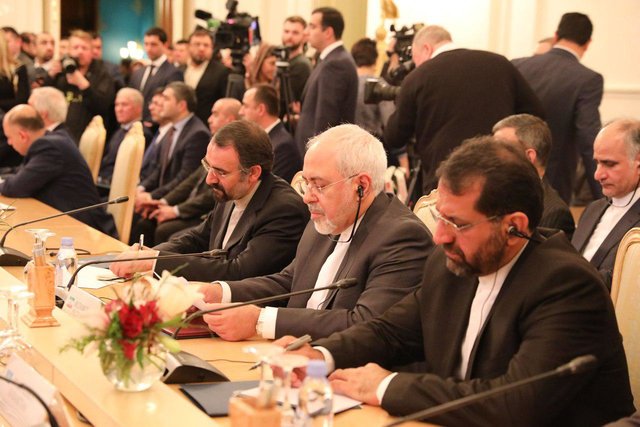 TEHRAN, Young Journalists Club (YJC) - Speaking in the 7th Caspian Sea littoral states ministerial meeting in Moscow on Tuesday, he said, signing Tehran convention as well as additional environmental protocols are the most important achievements of the talks in Moscow.

He said that inking agreements on security cooperation, protecting water resources, climatology and confronting emergency in Caspian Sea are important gains of the meeting.

Zarif noted that over 12 agreements and protocols are being discussed and finalized in Moscow.

The Iranian foreign minister noted that boosting bases of peace and stability in the sea, promoting confidence and lessening differences among the littoral states, expanding cooperation in port and navigation, transportation and transport, cooperation in energy, security, border guards, boosting joint investment, expanding ties among chambers of commerce, holding rescue drills, mutual visits by peace and friendship flotillas of littoral states from one another’s ports and cooperation in youth fields are other gains of the meeting.

Zarif said that the littoral states have unanimously agreed on settling Caspian Sea issues on their own, prohibition of giving their lands for military operation against one another, banning military presence of foreigners in the sea and navigation monopoly by flags of the 5 countries as well as major part of Caspian Sea legal regime convention.

He said that Iran is ready to provide access for the littoral states through its land for goods transportation, transit, transfer of oil, energy and gas and access to high seas.