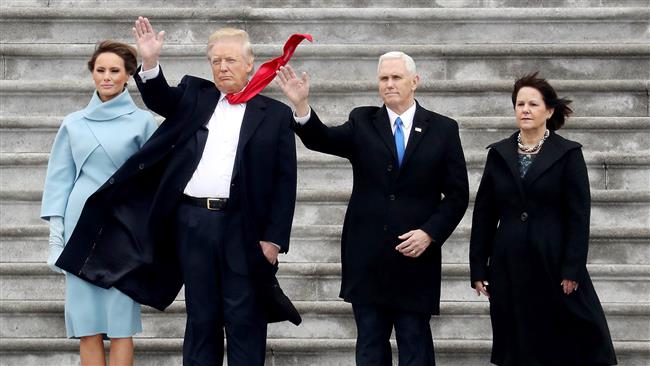 TEHRAN, Young Journalists Club (YJC) - According to a report published in The Atlantic on Tuesday, Mike and Karen Pence were surprised when the 2005 "Access Hollywood" tape in which Trump was heard making vulgar comments about women surfaced last year.

A former campaign aide told the publication that Karen Pence was "disgusted."

This comes as the United States is grappling with a growing list of sexual assault and harassment scandals that rocked the world of entertainment, business and politics.

A former campaign aide also said that after the tape surfaced, Republican Party officials expected that they would be able to get Trump to drop out of the presidential race before the second debate, according to The Atlantic.

"Little did they know, he has no shame," the former campaign aide said.

Trump was recorded during a taping for an “Access Hollywood” segment bragging about his ability to grope women because he's "a star." According to The New York Times, Trump has expressed doubt about the authenticity of the video.

"Access Hollywood" pushed back on the claim, saying they wanted to make "perfectly clear" that the tape is "very real."

In the hours after the video was revealed in October 2016, then-candidate Trump acknowledged he made the lewd comments and apologized.

Trump, who himself has been accused of sexual impropriety, also said that he was happy that women are now coming forward accusing lawmakers and media figures, many of whom Democrats, of sexual misconduct.