TEHRAN, December 6 - Following a summit of Caspian Sea littoral states, Russian Foreign Minister Sergei Lavrov said the five countries have agreed on “all the outstanding key issues” regarding the sea’s legal regime, and plan to hold a joint drill in the strategic waters next year. 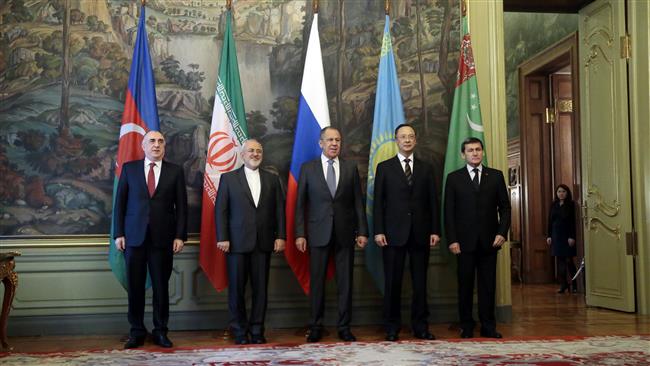 TEHRAN, Young Journalists Club (YJC) - Lavrov announced following the foreign ministerial meeting in Moscow that the draft text of the Convention on the Legal Status of the Caspian Sea was “practically ready” to be endorsed in the 5th Caspian Summit in Kazakhstan next year.

Lavrov and his Iranian, Azeri, Kazakh and Turkmen counterparts met in the Russian capital to discuss a comprehensive document outlining the duties and rights of the Caspian Sea littoral states, among other topics.

“We have completed our almost 20-year work on the Convention on the legal status of the Caspian Sea. This text will be submitted for approval by the heads of our states. We expect that they will support it,” Lavrov said.

The Caspian Sea is the largest enclosed body of water on Earth by area and is variously classed as the world’s largest lake or a full-fledged sea. The issue of its legal status was given significance after the collapse of the Soviet Union and the emergence of new independent states bordering the sea.

Elsewhere in his comments, the top Russian diplomat noted that defense ministries of the five Caspian Sea countries were “positively” interacting with each other and had planned to hold joint drills next summer.

“This year, actually all the littoral states have exchanged friendly visits by the navies’ ships. The Sea Cup 2017 international contest held in summer was a big success,” he added.

Speaking to reporters before his return to Tehran, Iran’s Foreign Minister Mohammad Javad Zarif expressed his satisfaction with the Moscow meeting.

The Vestnik Kavkaza website quoted Zarif as saying that Tuesday’s negotiations, which were aimed at making preparations for the 5th Caspian Summit, were “very good, serious and fruitful.”

Separately, Azerbaijani Foreign Minister Elmar Mammadyarov underlined the “need for maximum efforts to reach a consensus” on all remaining issues related to the Caspian Sea status before the future summit in Kazakhstan.