Tillerson says no normalization of NATO ties with Russia

TEHRAN, December 6 - U.S. Secretary of State Rex Tillerson told a NATO foreign ministers' meeting in Brussels on Wednesday that the Western allies agreed there was "no normalization" of ties with Russia. 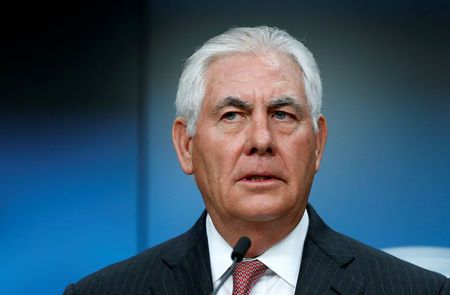 TEHRAN, Young Journalists Club (YJC) - "We had a lot of discussion at this NATO meeting ... over what is the proper engagement with Russia and I think there is broad consensus among all the NATO members that there is no normalization of dialogue with Russia today," he told reporters.

However, highlighting how the West depends on Russia in efforts to address the multiple conflicts in the Middle East, Tillerson said Washington saw it as Moscow's task to make sure Russia's ally Damascus takes part in U.N.-led peace talks on Syria.

Share to
Related News
Rex Tillerson is ‘proud’ of US diplomacy, but should he?
Tillerson says Ukraine is biggest obstacle to normal Russia ties
Tags
US ، NATO ، ties ، Russia
Your Comment