EU: Trump's decision on al-Quds to take Mideast to 'even darker times' 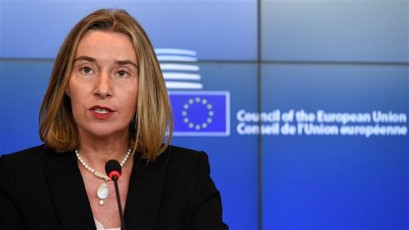 "It is a very fragile context and the announcement has the potential to send us backwards to even darker times than the ones we're already living in," she added.

Mogherini's comments came one day after Trump officially recognized Jerusalem al-Quds as the "capital" of Israel and directed his administration to begin a years-long process of moving the American embassy in Tel Aviv to the holy city.

The top EU diplomat underlined the need for "an even stronger engagement for peace" at the current difficult time.

"What we truly need in these difficult times is wisdom and to listen to the wise voices calling for peace and peaceful reactions," she said. "The most urgent priority now is that all relevant actors avoid to further escalate tensions on the ground."

The Tel Aviv regime lays claim to the entirety of Jerusalem al-Quds as its “capital” while the Palestinians want its eastern part as the capital of their future state.

"Moscow views the decisions announced in Washington with serious concern," the ministry said in a statement on Thursday.

"In light of this we call on all involved parties to show restraint and forgo any action that would be fraught with dangerous and uncontrollable consequences," it added.

Moscow further reiterated that the dispute over the status of Jerusalem al-Quds should be resolved through "direct Palestinian-Israeli talks".

Additionally, Kremlin spokesman Dmitry Peskov said the recent US move is causing a split in the international community.

The council is expected to meet on Friday for talks called by more than half its members in response to Trump’s controversial decision.

Turkey : US pulled the pin on a bomb

"The United States has pulled the pin on a bomb ready to blow in the region," Yildirim told a conference in Ankara on Thursday.

He emphasized that Turkey did not recognize the US measure, urging Washington to revise its decision.

"First of all, as Turkey, we consider this decision null and void. Secondly, Jerusalem, and particularly the al-Aqsa mosque, is considered a holy place by three religions. So a decision that changes or questions this status will stir up a big catastrophe," Yildirim said.

Meanwhile, the parliamentary group of the Hezbollah resistance movement said in a televised statement that Trump's recognition of Jerusalem al-Quds as Israel's "capital" constituted an unprecedented aggression against Palestine.

The statement by the Loyalty to the Resistance bloc also described resistance as the only way for the Palestinians to recover their rights.

The statement added that Trump's move was the "most dangerous" move made by any American administration as it threatened international security.

The Qatari emir "warned of the serious repercussions of this step, which would further complicate the situation in the Middle East and negatively affect the security and stability in the region," read a statement from the ministry.

Meanwhile, an Iraqi volunteer military force threatened to attack US forces in the country after Trump's move.

"The decision by Trump on al-Quds (Jerusalem) makes it legitimate to strike the American forces in Iraq," Harakat Hezbollah al-Nujaba Akram al-Kaabi said in a statement.

Moreover, Iraqi Foreign Minister Ibrahim al-Jaafari summoned the US ambassador to Baghdad to protest the decision.

Prominent Iraqi Shia cleric Muqtada al-Sadr also demanded the closure of the American embassy in Baghdad and warned that "we can reach Israel through Syria."

In the Palestinian territories, violent clashes erupted between protestants and Israeli forces across the Gaza Strip and the West Bank.

Protests were also held in Gaza and the West Bank cities of Bethlehem, Ramallah, al-Khalil (Hebron) and Nablus.

The Palestinian Red Crescent reported that dozens were wounded from tear gas, rubber bullets and live fire in the West Bank clashes.