TEHRAN, December 8 - U.S. Democratic Senator Al Franken announced his resignation on Thursday after facing a series of sexual misconduct allegations, and Republican Representative Trent Franks also said he was stepping down as he too was hit with ethics charges. 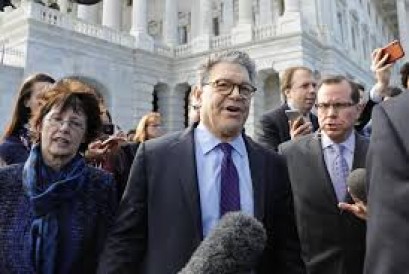 TEHRAN, Young Journalists Club (YJC) - U.S. Democratic Senator Al Franken announced his resignation on Thursday after facing a series of sexual misconduct allegations, and Republican Representative Trent Franks also said he was stepping down as he too was hit with ethics charges.

Franken, buffeted for weeks by sexual harassment charges and under pressure from party colleagues, said on the Senate floor he would leave in a few weeks, although he denied some of the allegations against him and questioned others.

The 66-year-old former comedian from Minnesota had been seen as a rising star in the Democratic Party.

“I know in my heart that nothing I’ve done as a senator - nothing - has brought dishonor on this institution,” he said. “Nevertheless, today I am announcing that in the coming weeks, I will be resigning as a member of the United States Senate.”

Hours later, Franks announced his resignation after two former staff members complained about discussions he had with them about his efforts to find a surrogate mother.

“I deeply regret that my discussion of this option and process in the workplace caused distress,” said Franks, who was first elected to his Arizona congressional seat in 2002 and is an outspoken opponent of abortion.

Franks said in a statement that he and his wife “have long struggled with infertility.”

The developments came with Congress already held in low regard by voters. According to a Reuters/Ipsos poll, only 20 percent approved of the way Congress was handling its job, with 70 percent disapproving.

In recent weeks, charges of sexual misconduct have taken down prominent people in the worlds of entertainment, media and politics.

It is somewhat rare for members of the Senate or House of Representatives to resign from office, but veteran Democratic Representative John Conyers also resigned earlier this week amid sexual harassment accusations that he has denied.

The House Ethics Committee said on Thursday it was investigating yet another lawmaker. Blake Farenthold, a Republican representative from Texas, faces allegations of sexual harassment, discrimination and retaliation involving a former female staff member.

Franken has the highest profile of the lawmakers hit by allegations in the past few weeks.

Reuters has not independently verified the accusations against Franken, Franks, Conyers or Farenthold.

Franken’s seat will initially be filled by a Democrat appointed by Minnesota’s Democratic governor, meaning the Republicans’ slim majority in the Senate will not change.

Allegations that Franken had groped and tried to kiss women without their consent began to surface three weeks ago.

He initially said he was embarrassed and ashamed by his behavior but would not resign.

But the majority of his Democratic colleagues in the Senate called on Wednesday for his resignation after a new allegation, denied by Franken, hit the news.

“Some of the allegations against me are simply not true. Others I remember very differently,” Franken said on Thursday.

Striking a tone of defiance, he also sought to contrast himself with two prominent Republicans - President Donald Trump and Senate candidate Roy Moore.

“I, of all people, am aware that there is some irony in the fact that I am leaving while a man who has bragged on tape about his history of sexual assault sits in the Oval Office and a man who has repeatedly preyed on young girls campaigns for the Senate, with the full support of his party,” he said.

Trump was heard bragging about kissing and forcibly touching women in a 2005 videotape that surfaced last year as he was running for the White House. He apologized for the remarks, but called them private “locker-room talk” and said he had not done the things he talked about.

Trump also denied allegations at that time by at least 12 women of sexual advances and groping in the past.

Moore, who is running for the Senate in Alabama in a special election on Tuesday, has been accused by several women of sexual assault or misconduct when they were teenagers and Moore was in his early 30s. Moore, 70, has denied the accusations, which Reuters has not independently verified.

Trump has backed Moore, but Senate Republicans have been cooler toward his candidacy.

In pressing Franken to step aside, Democrats have tried to capture the moral high ground and draw a distinction between their party and Republicans.

“In every workplace in America, including the U.S. Senate, we must confront the challenges of harassment and misconduct,” said Amy Klobuchar, Franken’s fellow Democratic senator from Minnesota.

Similarly, House Republican Speaker Paul Ryan said on Thursday he had told Franks that he should resign.

A special election will be scheduled to determine a replacement for Franks.

While a Democrat will be appointed initially to replace Franken, his departure could complicate the party’s efforts to maintain or build on the 46 Senate seats they hold. Two independent senators also vote with the Democrats.

Republicans are defending eight seats in the congressional elections in November 2018 but Democrats will be defending 26 if Minnesota holds a special election for Franken’s seat.

The election to fill Franken’s seat could be close. When he ran in 2008, the race was decided after an extensive recount, with Minnesota’s Supreme Court weighing in.

In the 2016 presidential election, Democrat Hillary Clinton won the state by less than 2 percentage points.