TEHRAN, December 8 - Senior Muslim figures attending the international Islamic Unity Conference in Tehran have slammed a US decision to recognize Jerusalem al-Quds as Israel’s “capital,” calling for a new intifada (uprising) against the scheme targeting the occupied Palestinian city. 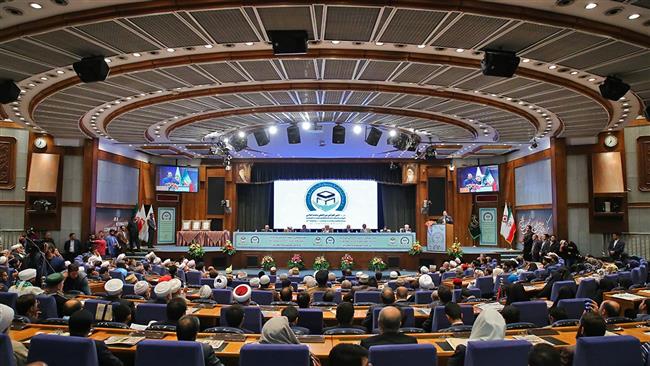 TEHRAN, Young Journalists Club (YJC) - In their final statement, the participants in the 31 International Islamic Unity Conference condemned US President Donald Trump’s Wednesday remarks about al-Quds and his order to relocate the US embassy from Tel Aviv to Jerusalem al-Quds.

The three-day event attended by around 520 dignitaries, ministers, scholars, university professors, and representatives from various associations concluded in Tehran on Thursday.

The statement emphasized the need to counter "the new US policy of Judaizing the Noble al-Quds and dominating sacred places of the Muslims."

“Accordingly, the Muslim world needs a new Palestinian intifada, which is supported by all the countries favoring freedom and human rights as well as all political powers.”

Washington’s al-Qud move has raised a chorus of outcry across the international community. The Muslim world, the United Nations and even US allies in the West have warned against its realization, saying it would plunge the already tumultuous region into new upheaval.

Palestinian leaders have declared Friday as the “day of rage” against Israel and the US.

Protests are planned later Friday in Palestinian territories and around the world against Washington’s decision to recognize Jerusalem al-Quds as Israel’s “capital.”