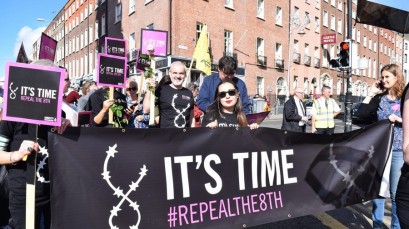 Ireland’s Standards in Public Office Commission informed the human rights advocacy group that it had breached Irish law by accepting funds from a foreign donor and may face criminal investigation, Amnesty International Ireland said in a statement.

The organization says the €137,000 grant received from the Open Society Foundation (OSF) last year was used to support a campaign to ensure abortion laws in Ireland comply with human rights.

Amnesty blasted the law as draconian, and defiantly stated it would not comply with the order to return the funds.

Electoral Act 1997, as amended in 2001, forbids overseas donations of more than €100 to “third party” organizations for“political purposes.” Violation of this law can carry a penalty of up to three years imprisonment.

Earlier this year, it emerged that three organizations, including the Abortion Rights Campaign and Amnesty International had received funds from the OSF.

The Abortion Rights Campaign was ordered by SIPO to return the funds or face criminal investigation – an order they duly complied with. However, no such order was made against Amnesty International.

The organization said it was using the grant to carry out opinion polling and “research into models of abortion law reform that might bring Ireland into compliance with its international human rights obligations,” an explanation apparently accepted at the time, reported The Irish Times.

O’Gorman says it is unclear why SIPO reversed its decision, but noted that some groups and certain media outlets have been framing their campaign to reform Ireland’s abortion law as ‘controversial’ or ‘too political.’ “They have also portrayed foreign funding as somehow sinister,” he said.

Amnesty International is now calling on the Irish government to urgently amend the Electoral Act so that civil society groups are not so “punitively” restricted in their access to funding.

Soros’ Open Society Foundation is the second largest charity in the US and said to be the most influential around the globe. It has been accused of undermining democracy in several countries – a charge denied by the NGO.