US isolated at UNSC as allies condemn Trump's al-Quds decision 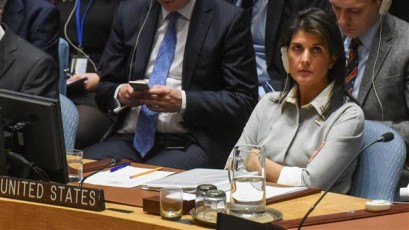 The Security Council convened an emergency meeting with regard to Palestine on Friday upon the request of Britain, France, Sweden, Bolivia, Uruguay, Italy, Senegal and Egypt.

Following the session, the US' traditional Western allies -- Britain, France, Germany, Sweden and Italy -- issued a joint statement, denouncing Trump's decision as "unhelpful in terms of prospects for peace in the region."

"We stand ready to contribute to all credible efforts to restart the peace process, on the basis of internationally agreed parameters, leading to a two-state solution," they said.

"We encourage the US administration to now bring forward detailed proposals for an Israel-Palestinian settlement," the statement added.

UN Middle East envoy Nickolay Mladenov warned the Security Council against the risk of violent escalation, saying, "There is a serious risk today that we may see a chain of unilateral actions, which can only push us further away from achieving our shared goal of peace."

In response, US Ambassador to the UN Nikki Haley accused the international organization of undermining the peace prospects by "bullying" Israel.

"Israel will never be, and should never be, bullied into an agreement by the United Nations, or by any collection of countries that have proven their disregard for Israel's security," Haley said.

She claimed that the US has not adopted any stance on Jerusalem al-Qud's boundaries, and that it is not advocating any changes to the arrangements at the holy sites.

Trump on Wednesday defied global warnings and said the US formally recognizes Jerusalem al-Quds as the “capital” of Israel and will begin the process of moving its embassy to the occupied city, breaking with decades of American policy.

'US not mediator anymore'

He argued that the US cannot continue to monopolize the peace process as Washington is biased in favor of Israel and urged the Security Council to denounce what he described as an "irresponsible" US decision.

Mansour called on the Security Council to reject any violation of its position that the status of Jerusalem al-Quds is unresolved and it should be negotiated based on the so-called two-state solution.

The Palestinian envoy warned that the existing conflict can turn "into a never-ending religious war that will only be exploited by extremists, fueling more radicalism, violence and strife in the region and elsewhere."

Washington’s al-Quds move has raised a chorus of outcry across the international community. The Muslim world, the UN and even US allies in the West have criticized the bid, saying it would plunge the already tumultuous region into new upheaval.

Palestinian leaders declared Friday as the “day of rage” against Israel and the US.

Clashes broke out between Israeli troops and Palestinian protesters after Friday prayers in Jerusalem al-Qud's Old City, Hebron (al-Khalil), Bethlehem and Nablus in the West Bank as well as the besieged Gaza Strip. At least two Palestinians were killed and about 770 others were injured during the unrest.