TEHRAN, December 8 - An Iranian cleric called on the Muslim governments to take practical measures against the US president’s move to recognize al-Quds as the capital of Israel, saying the lunatic decision by Trump proved that Palestine should stick to resistance and Intifada. 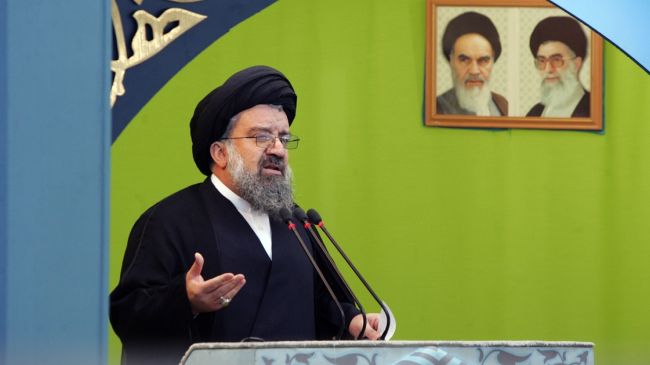 Stressing the need for practical action against the “blatant violation of rights of Palestinians,” the cleric said all Muslim countries should withdraw their ambassadors from the occupied Palestinian territories and called for a plan to close all Israeli embassies around the world.

Tough reaction and protests should continue against the US and Israeli plans, Ayatollah Khatami added, saying the US president’s decision ruined 70 years of negotiations and proved that Intifada (uprising) remains as the only option for Palestine to stand against the Zionist regime.

Even the American officials acknowledge that Trump is a psycho and needs to receive treatment before causing more catastrophes, he added.

The Iranian cleric finally denounced a muted response by certain Muslim states to Trump’s controversial decision, saying the time has come for the Arab governments to defend the Palestinians against the Israeli occupiers.

The remarks came after Trump officially declared the disputed city of al-Quds Israel's capital, despite warnings from around the world that the measure risks triggering a fresh wave of violence in the Middle East.

In a speech at the White House on Wednesday, Trump said his administration would also begin a years-long process of moving the American embassy in Tel Aviv to the holy city.

Israel has occupied East Jerusalem since the 1967 Middle East war. It annexed the area in 1980 and sees it as its exclusive domain. Under international law, the area is considered to be occupied territory.