Riyadh Trying to Make Up for Defeat in Yemen by Punishing Civilians: Activist

TEHRAN, December 9 - A Yemeni human rights activist based in London expressed deep concern about the ongoing humanitarian catastrophe in Yemen and said the Saudi-led coalition is trying to make up for its defeat in the war on the Arabian Peninsula country by punishing civilians. 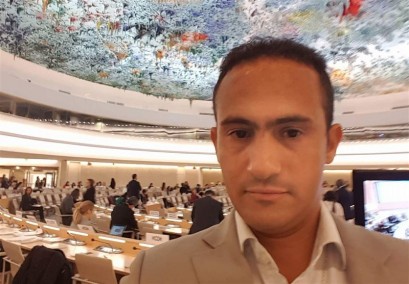 TEHRAN, Young Journalists Club (YJC) - A Yemeni human rights activist based in London expressed deep concern about the ongoing humanitarian catastrophe in Yemen and said the Saudi-led coalition is trying to make up for its defeat in the war on the Arabian Peninsula country by punishing civilians.

“Well, for three years, the Saudis have been bombing Yemen and imposed a blockade stopping all the humanitarian aids from coming into the country,” Abdulsalam Aldhahibi said in an interview with the Tasnim News Agency.

The Saudis are not going to win the war, he said, adding, “They have already lost the war.”

What they are doing now is that they are trying to punish the Yemeni people as a general punishment to make up for their defeat, the activist went on to say.

“There was a slight entrance for humanitarian aids coming from the UN for the last two years (but) since the Yemeni army and the National (Popular) Committees launched a missile against Riyadh there has been a total blockade on Yemen,” he noted.

“Actually, all the UN ships and vessels have been stopped by the Saudi-led coalition; all the aids and medicines are forbidden now to come into the country even after they (Saudis) search them."

“This is against the international law and against the UN resolution on Yemen because they do not have the right to stop the food and medicines; according to the resolution, they have to search for weapons," he added.

“So, what is facing Yemen is hundreds of thousands of children facing death. There is a shortage of medicine. We are facing now a situation of maybe one week of food storage and then it would be empty for the whole country so I can say that there is a human catastrophe in Yemen.”

The rights activist further pointed to the future of the war and said, “The way that the Saudis are doing now in Yemen will not continue.”

“We are not just dying; we are fighting back,” he said, adding, “If you look what actually the Saudis gain from this war and what they lose, you can see that the Saudis are going down."

“Everybody knows about it because of this new prince (Saudi Crown Prince Mohammed bin Salman) but how long that (the war) will take, I cannot give it a long time but we are more concerned about the lives that in this time are going to be lost; I mean the casualties among the civilians in Yemen, especially the weak ones, the children, the sick people because of the blockade.”

“But in terms of the end of the war, I can tell you I am a hundred percent certain about my answer that we are the Yemenis and we are victorious. I mean we will not lose this war and we are winning it and they will not gain anything,” he underlined.

Elsewhere in his remarks, Aldhahibi pointed to military achievements of the Yemeni forces and the launch of domestically made missiles against the Saudis positions and said, “In the beginning of the war, we were in a situation that we could not lunch any missiles there.”

“We worked; we even did not have that heavy military equipment so that we can defend ourselves,” he said.

“We are moving forward because it is our position of self-defense,” he said, adding, “So what I am going to say here is that the Saudis are losing more and more; they are not going to win anything.”

Aldhahibi went on to say that in terms of battles, Yemeni forces have been able to confront Saudis not only inside Yemen but also on Saudi soil.

“In the beginning, the Saudis denied all of that but if you see the last report by the Arabic League, they actually confessed that there were more than 18 missiles launched against them and that the Yemeni army and the Houthis are inside the Saudi borders,” he noted.

“So after three years of war, instead of saying we were going to get Sana’a, the capital city of Yemen, in one week, today they are complaining that the Yemeni army is in their territories and launching missiles against their own capital city.”

Yemeni people have been under massive attacks by a coalition led by Saudi Arabia for nearly three years but Riyadh has reached none of its objectives in Yemen so far.

Over 14,000 Yemenis, including thousands of women and children, have lost their lives in the deadly military campaign.