Thousands rally in Morocco against US Jerusalem move

TEHRAN, December 10 - Tens of thousands of protesters rallied in Morocco's capital Rabat on Sunday as demonstrations against US President Donald Trump's declaration of Jerusalem as Israel's ‘capital’ continued to spread. 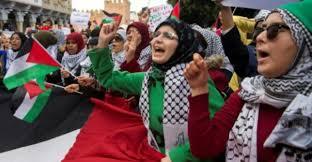 "The Palestinian people have suffered so much and continue to suffer because of Israel's barbaric colonisation," said one of the protesters, 43-year-old Mustapha.

"We must, more than ever, make our voices heard against this decision by Trump that will deprive the Palestinians of their land," said the lawyer from Casablanca, accompanied by his six-year-old daughter.

Trump's decision -- which upended decades of US diplomatic practice -- has drawn global condemnation, sparked demonstrations across the Muslim world and led to days of unrest in Palestine.