TEHRAN, December 10 - Iranian President Hassan Rouhani has lashed out at his American counterpart for making an "incorrect" decision to recognize Jerusalem al-Quds as the "capital" of Israel, warning that the move adds fuel to tensions in the Middle East. 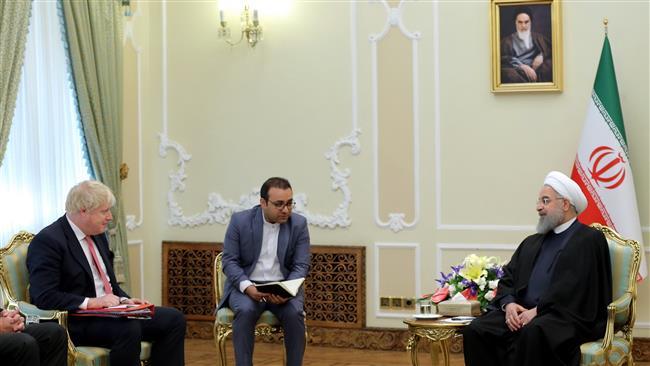 TEHRAN, Young Journalists Club (YJC) - "The regional situation is such that one should not fan the flames and the US president's recent decision to move the country's embassy to al-Quds was an incorrect decision and was [like] pouring gasoline on the flames in the region," Rouhani said in a meeting with British Foreign Secretary Boris Johnson in Tehran on Sunday.

US President Donald Trump sparked international outrage on Wednesday when he declared that the US was recognizing Jerusalem al-Quds as the “capital” of Israel and that he had instructed his administration to begin the process of moving the American embassy from Tel Aviv to the ancient city.

On Sunday, violent clashes erupted outside the US Embassy in the Lebanese capital city of Beirut during a protest against US president’s decision to officially recognize Jerusalem al-Quds as Israel’s capital.

Elsewhere in his remarks, Rouhani said Iran sought to establish sustainable peace and stability, help end war and bloodshed, and uproot terrorism in the region, adding that Tehran-London talks could lead to the development of regional stability.

It is clear that Iran's constructive role saved two regional countries from the threat of terrorism, he said, adding, "No one can doubt Iran's positive measures in the region."

Backed by popular groups and Iranian military advisors, armed forces in Iraq and Syria have managed to flush Daesh militants out of their last strongholds in both countries, declaring full victory over the notorious terror group.

The Iranian president also stressed the importance of boosting cordial relations between Tehran and London after the implementation of the landmark nuclear agreement, known as the Joint Comprehensive Plan of Action (JCPOA), reached between Iran and the P5+1 group of countries in 2015.

He expressed dissatisfaction with the level of Tehran-London cooperation after the JCPOA implementation and urged the two sides to make more efforts to reach "a desirable point in relations."

The president emphasized that cooperation between Iran and the P5+1 led to the valuable international agreement and called on all signatories to show their determination in practice to use the atmosphere after the JCPOA as an opportunity to expand all-out relations.

British Prime Minister Theresa May on November 30 reaffirmed her country's support for the nuclear agreement in the face of the US administration's harsh rhetoric and threats to "terminate" it.

The US president delivered an anti-Iran speech on October 13, in which he said he would not continue to certify Iran’s compliance with the terms of the JCPOA, reached under his predecessor Barack Obama, and warned that he might ultimately terminate the agreement.

The British foreign secretary, for his part, said Iran had taken positive measures in the fight against terrorism and promoted regional peace and stability.

Johnson added that London did not regard Trump's recognition of Jerusalem al-Quds as an appropriate move.

He said the JCPOA was a positive accord, which should be upheld in a way that the Iranian nation could take advantage of its economic benefits.

Meanwhile, in a meeting between the British foreign secretary and head of the Atomic Energy Organization of Iran (AEOI), Ali Akbar Salehi, the two sides discussed the JCPOA and ways to remove banking restrictions after the implementation of the deal.

Salehi reaffirmed Iran's full compliance with the JCPOA and said restrictions in banking cooperation between the two countries should be removed.

Johnson said his country supported the nuclear agreement, noting that the banking restrictions were being removed gradually.

Salehi and Johnson also exchanged views about the latest developments in the region, particularly in Iraq, Syria and Yemen, as well as relations between Iran and Saudi Arabia.