TEHRAN, December 10 - Leader of the Islamic Revolution Ayatollah Seyyed Ali Khamenei has praised the “sacrifice and sportsmanship” of an Iranian wrestler who intentionally lost his match during the U23 World Championships in Poland to avoid facing an Israeli contender. 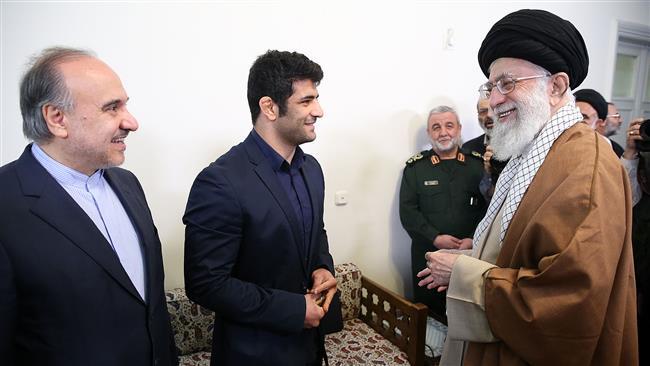 TEHRAN, Young Journalists Club (YJC) - In a meeting on Sunday with Alireza Karimi and his family, the Leader advised the wrestler to “expect his spiritual reward from God.”

“Of course, [Iranian] officials should spare no effort in terms of praise and material reward,” Ayatollah Khamenei stated.

"I truly felt proud that you showed that one of our youths is ready to trample upon his ego for a great and lofty goal and forgo his definitive right and certain championship," the Leader added.

Later in the meeting, Ayatollah Khamenei presented his ring to Karimi as a gift.

Karimi was beating Russian Alikhan Zhabrailov in a match on November 26 and was leading 3-2, but he purposefully threw his bout to avoid competing against Israel’s Uri Kalashnikov as his second-round opponent.

Iran does not recognize the Israeli regime and Iranian athletes refrain from competing against Israelis at international competitions.

In a ceremony on November 29, the Wrestling Federation of the Islamic Republic of Iran praised Karimi for his sacrifice.

Israeli Prime Minister Benjamin Netanyahu on December 4 claimed in a video that Iran had forced Karimi to lose, saying that the country "would rather see its athletes lose than compete against Israelis."

Answering to Netanyahu’s ravings, Karimi said he did not knew Netanyahu, adding that he was a soldier for his country and took pride in being an Iranian.