TEHRAN, December 11 - An incomplete tunnel running for more than a kilometer from Gaza into southern Israel has been destroyed, Israel's army announced on Sunday. 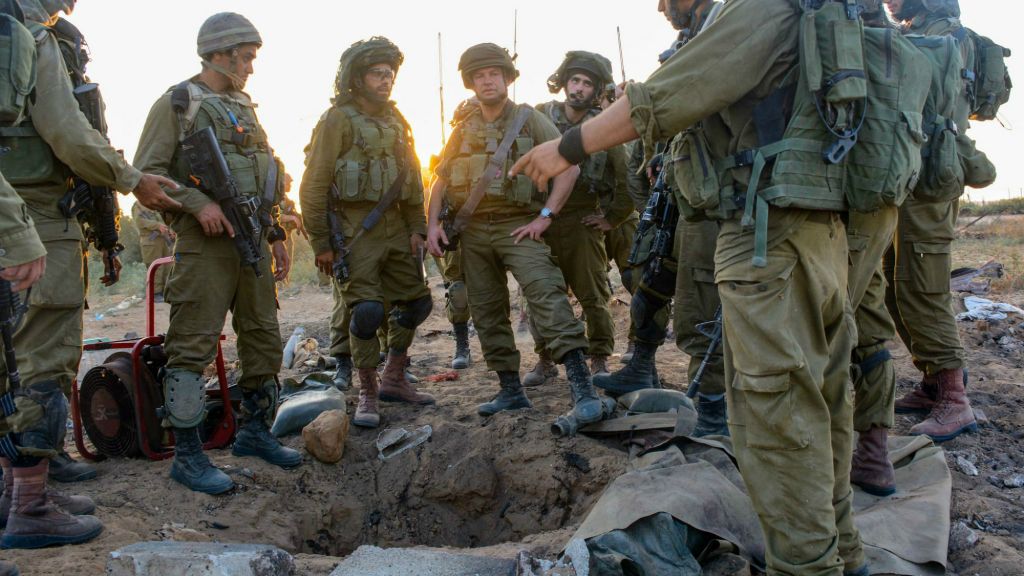 IDF infantrymen congregating around a tunnel entrance in Gaza, July 24, 2014
TEHRAN, Young Journalists Club (YJC) - Israel Defense Forces spokesman Jonathan Conricus said the tunnel, which originated in the city of Khan Younis, had penetrated several hundred meters inside Israeli territory, finishing a kilometer away from the nearest village in Israel.
Conricus described the tunnel as "very substantial," adding that it had communication systems, air vents, electricity and reinforced concrete structure. He said that, based on intelligence, the Israeli army believed the tunnel belonged to Hamas, the militant organization that runs Gaza.
Conricus said that Israeli intelligence had monitored the tunnel for months, adding that at no time were any Israeli military personnel or civilians at risk. While the tunnel was not yet complete, Conricus claimed Hamas was not far from establishing an exit point.
"We see this as a severe violation of Israeli sovereignty," Conricus told journalists in a phone call on Sunday.
"We hold the Hamas organization responsible twice (over). Once, because it is responsible for the Gaza Strip, and any act of violence that emanates from the Gaza Strip is under Hamas responsibility. And second because this is a Hamas tunnel."
Conricus said the tunnel was destroyed using a new system to detect, expose, and destroy tunnels. It was destroyed by other means than explosives, Conricus said, but he would not give any further details. The army did not believe there were any casualties inside the tunnel after it had been demolished, he told journalists.
Hamas did not respond to a CNN request for comment on Israel's claim.
This is the second such tunnel from Gaza destroyed using the new Israeli system in six weeks.
In October, more than a dozen militants were killed when Israel's army destroyed another tunnel leading from Gaza into Israel.
Israel announced it was accelerating the creation of a new subterranean wall around Gaza in August. The 3 billion shekel ($850 million) wall will span the 51-kilometer border.
Israeli politicians hailed the news and suggested the detection and demolition system might be about to give Israel a significant edge in the threat posed by tunnels. Prime Minister Benjamin Netanyahu, speaking in Paris, described the new system as a "tremendous technological innovation." His Intelligence Minister, Israel Katz, said the army action conveyed a clear message that "the era of the tunnel threat is nearing an end."
As well as tunnels under the border with Israel, there are also tunnels that run underneath Gaza's border with Egypt, which are used to smuggle in food and other supplies, as well as weapons.
During the 2014 Gaza war, Hamas militants launched surprise attacks from tunnels that crossed under Israel's security fence and into Israel. Identifying and destroying the tunnels became a major goal for the Israeli military, which found many tunnels that were more than a mile long and 60 feet deep.
Source: CNN
Share to
Related News
‘Russia’s all we talk about but voters don’t care’: CNN reporter admits network’s obsession on air
Hamas vows to avenge Israeli killing of fighters in Gaza airstrikes
Israeli forces open fire at protesters in Jerusalem al-Quds
US VP Pence unwanted in Palestine: Fatah
EU: Trump's decision on al-Quds to take Mideast to 'even darker times'
Tags
Israel ، Hamas ، Lebanon ، Palestine
Your Comment