TEHRAN, December 11 - At least four people have been injured following an explosion in the Port Authority area near Times Square in New York with Police have named the suspect in the New York explosion as 27-year-old Akayed Ullah of Bangaladeshi origin. 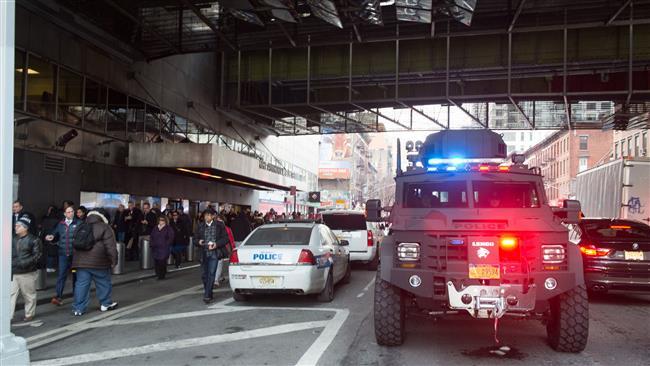 TEHRAN, Young Journalists Club (YJC) - The explosion took place on Monday morning at the station, which is one of the busiest commuter hubs during rush hour, at 42nd Street and 8th Avenue in New York, according to officials.

"The NYPD is responding to reports of an explosion of unknown origin at 42nd Street and 8th Ave, #Manhattan. The A, C and E line are being evacuated at this time. Info is preliminary, more when available," the New York police department wrote on their Twitter account.

New York Mayor Bill de Blasio said the blast was an “attempted terrorist attack,” and police identified the suspect as Akayed Ullah, 27. Authorities said the attack appears to be an isolated incident.

“Thank God the perpetrator did not achieve his ultimate goals,” de Blasio said.

Law enforcement sources said Ullah – who had wires attached to him – was taken into custody.

He was arrested after the device partially detonated, according to sources.

Francisco Ramirez -- a commuter -- told CNN that he heard two explosions as he was exiting a bus about 7:45 a.m. ET.

"From what I saw it sounded like it came from the subway, but I'm just guessing," he said. "It was two distinct explosions seconds from each other. As I was making my way toward the outside, I kept getting shoved by cops and there were cops at every entrance blocking and there was police and SWAT everywhere."

"It was scary. It was just a lot of chaos but I didn't see any injuries," he added.