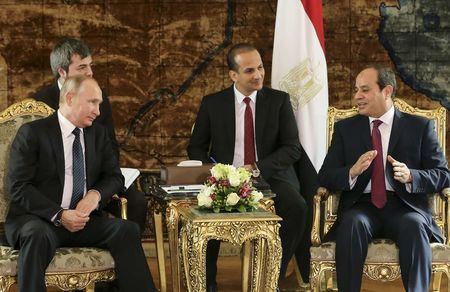 TEHRAN, Young Journalists Club (YJC) - Putin's visit to Cairo reflects the deepening ties between Russia and Egypt, the second largest recipient of U.S. military aid after Israel and a strategic U.S. partner in the Middle East because of its control of the Suez Canal.

Putin, who is due to fly to Turkey after Cairo, briefly visited a Russian base in Syria before arriving in Egypt and ordered Russian forces to start withdrawing from Syria after a two-year military campaign.

They were also to discuss the resumption of Russian flights to Egypt as soon as possible, a presidential spokesman told MENA state news agency.

Moscow halted civilian air traffic to Egypt in 2015 after militants bombed a Russian Metrojet flight leaving from the tourist resort of Sharm el-Sheikh, killing 224 people onboard.

Russian state nuclear company Rosatom said on Monday the Dabaa nuclear station it will build in Egypt will have four reactors and cost up to $21 billion with construction expected to finish in 2028-2029.

Moscow and Cairo signed an initial agreement in 2015 for Russia to build the plant, with Russia extending a loan to Egypt to cover the cost of construction.