US partner in bloodshed with al-Quds decision, Erdogan says

TEHRAN, December 11 -Turkish President Recep Tayyip Erdogan has lambasted the recent decision by US President Donald Trump to recognize Israeli-occupied Jerusalem al-Quds as the capital of the Tel Aviv regime, stating that Washington is a “partner to bloodshed” and violence that may spark in the Middle East region. 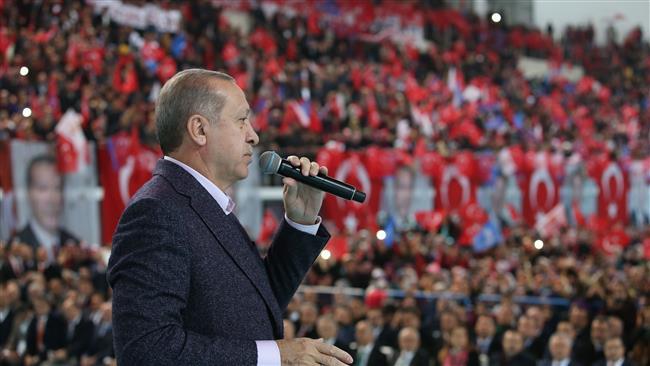 TEHRAN, Young Journalists Club (YJC) - Speaking at an event in the capital Ankara on Monday, Erdogan said the “struggle” of Muslims would not end until there was an independent Palestinian state.

“With their decision to recognize Jerusalem al-Quds as Israel's capital, the United States has become a partner to the bloodshed,” the Turkish president noted, adding, “The statement by US President Donald Trump does not bind us, nor does it bind Jerusalem.”

“Those who think they own Jerusalem al-Quds today will not find trees to hide behind,” he said.

On Sunday, Erdogan took a sharp jab at Israel, describing it as a “terrorist entity” and “killer of children.”

Speaking at a ruling Justice and Development Party’s congress in the central Turkish city of Sivas, Erdogan blasted the “disproportionate” force being used by Israeli forces against Palestinian protesters, saying that Israel was an “oppressive and occupation” regime.

“Palestine is an innocent victim... As for Israel, it is a terrorist regime, yes, terrorist! We will not abandon Jerusalem al-Quds to the mercy of a regime that kills children,” he commented.

On Sunday, violent clashes erupted outside the US embassy in the Lebanese capital city of Beirut during a protest against US president’s decision to officially recognize Jerusalem al-Quds as Israel’s capital.