TEHRAN, December 12 - Russian Defense Minister Sergey Shoygu announced on Monday that the Russian forces participating in the war on terrorism in Syria have started to return to Russia. 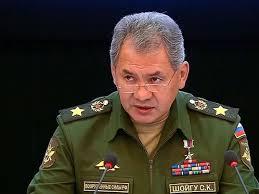 TEHRAN, Young Journalists Club (YJC) - Shoygu said in response to a question raised by a journalist about the time needed for the return of the Russian forces “this depends on the situation.”

President Putin ordered the Russian Defense Minister and the Chief of General Staff to start the withdrawal of part of the Russian group of soldiers present in Syria.\

Share to
Related News
Trump to Putin: US was glad to save many lives in Russia by helping foil major terrorist attack
Putin must nudge Syria into U.N. peace deal, mediator says
Tags
Russian forces ، Syria ، return ، Shoygu
Your Comment