Firefighters only contain 15% of California blaze

TEHRAN, December 12 - One of the largest single wildfires California has ever had to deal with is choking a number of communities with ash after it exploded in size, leaving many gasping for air. 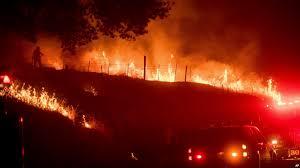 According to authorities, 15 per cent of that fire has been contained – having been reduced down to 10 per cent as it grew to more than 230,000 acres into Monday.

The wind gusts that helped push the fire across the county line were slowing as the day wore on, but firefighters faced difficulties in protecting communities such as Carpinteria thanks to the narrow roads into the foothills. Instead they set up defensive positions on residential streets.

The number of structures destroyed by the fire stands at almost 800 according to authorities – with more damaged.

Officials handed out masks to those who stayed behind in Montecito, an exclusive community about 75 miles northwest of Los Angeles that’s home to stars such as Oprah Winfrey, Jeff Bridges and Drew Barrymore.

A number of celebrities had evacuated over the weekend as the fire approached. Actor Rob Lowe wore a mask as he live-streamed his family evacuating Sunday from their smoke-shrouded home.

“Praying for the people in my area,” he said to his Instagram followers. “Hope everybody’s getting out safe like we are, and thanks for the prayers and thoughts. And good luck to the firefighters, we need you!”

Talk show host Ellen DeGeneres tweeted that neighbours were helping each other and their animals get to safety.

“I’m sending lots of love and gratitude to the fire department and sheriffs. Thank you all,” she wrote.

Public health officials have expressed concern as soot and smoke continue to fill the air.

Senior Associate at environmental think tank World Resources Institute Todd Gartner told The Independent that there is also a concern about that from the climate change perspective; “those plumes of smoke, that’s carbon emissions”.

Light gusts were driving the flames away from communities, Santa Barbara County fire spokesman Mike Eliason said. But the possibility of “unpredictable” gusts would keep firefighters on edge, he said.

“I’m not frightened yet,” Carpinteria resident Roberta Lehtinen told KABC-TV. “I don’t think it’s going to come roaring down unless the winds kick up.”

Firefighters have gained more control over the other five major blazes in Southern California and so have turned many of their resources to the Santa Barbara foothills to combat the Thomas Fire.

The total area scorched by these fires is now approximately 256,000 acres or 1,036sq km (400 square miles), which is an area larger than New York City.

Over 16 million people are affected by the fires between Los Angeles, San Diego, Riverside, Santa Barbara, and Ventura counties.

More than 200,000 people have already been evacuated from their homes.

The fires that began last Monday night collectively amounted to one of the worst conflagrations across Southern California in the last decade. They have, however, been far less deadly than the blazes in Northern California’s wine country in October that killed over 40.

One death has been reported, a 70-year-old woman died in a car accident as she attempted to flee the flames in Ventura County last week.

However, 46 horses at a thoroughbred training facility in San Diego among several others from ranches, were reported dead.

For many, the ash and smoke is the biggest worry for now.

Santa Barbara Mayor Helene Schneider said winds have calmed a bit, keeping the fire in the hills outside of the city. The fire was not spreading quickly, but it also is not clearing out smoke – and a layer of ash had settled over the city.

“Every where you go, you see people wearing the masks,” said Ms Schneider.