TEHRAN, December 13 - Iranian senior MP said regional issues will deteriorate as a result of the indiscreet and ill-considered decision by Donald Trump to recognize al-Quds as capital of the Zionist regime. 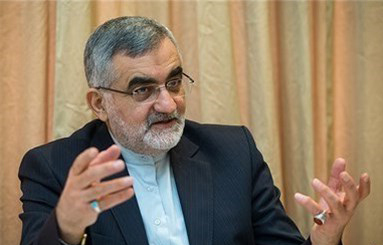 Referring to regional developments and protests by the European and Islamic states against the US move, Boroujerdi deemed it as a sign of the great significance attached to Palestine by the world public opinion.

The official later emphasized that need to bolster and expand mutual ties in various arenas asserting “age-old friendly relations between Tehran and Yerevan are continuously growing especially in parliamentary fields.”

Boroujerdi added that holding dialogue and constant exchange of views between specialized commissions of the two parliaments would help develop cooperation in different economic and security fields.

The Iranian MP later stressed the necessity to reinvigorate collaborations in the field of joint venture projects in the sectors of industry, energy and transport.

The Armenian MP Baghdasaryan, for his part, said Iran was an important and influential country in the region; “as such, the Armenian government and parliament are willing to strengthen and deepen relations with Iran.”

The visiting official said Iran’s balanced policy could lead to establishment of peace and tranquility in the region.

The Armenian MP underlined acceleration in execution of economic agreements between the two countries and expressed the hope for increase in joint venture investment volume.

Following visit of President Rouhani to Armenia in January 2017 and holding talks with Armenian President Serzh Sargsyan, many senior delegations from both countries had reciprocal visits to each other’s capitals and grounds for development of cooperation were prepared.