TEHRAN, December 13 - EU Foreign Policy Chief Federica Mogherini said that Iran-EU ties has grown by 94 percent in the first half of 2017 comparing to similar period in the year before, noting that continuing implementation of the nuclear deal is an ‘absolute must’. 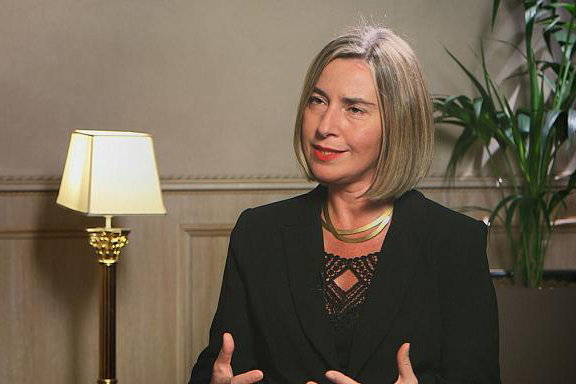 TEHRAN, Young Journalists Club (YJC) - “We cannot allow an agreement which has been efficient and obtained its goals to be damaged,” she said speaking at the European Parliament plenary session on European Foreign Security and Defense Policy.

“If we look around us, and we do it quite consistently today, we see a dangerous world indeed. Tensions risk to rise around the Holy Places of Jerusalem – we will discuss this in the next debate; Da'esh has been defeated in Iraq, but the war in Syria is not over yet; Egypt has just suffered one of the worst terrorist attacks in its history; the war in Yemen is getting worse by the day; and in the Korean peninsula, to look a little bit further but to a security challenge that is potentially affecting all of us, nuclear proliferation is a reality.

“Against this background, preserving and implementing the nuclear deal with Iran is an absolute must. We simply cannot afford more tension in the Middle East and another nuclear proliferation crisis. We cannot afford to undermine the credibility of a multilateral agreement, endorsed by the UN Security Council Resolution, and we cannot afford to dismantle a deal that works and delivers on its promises.

“The deal with Iran is ensuring the peaceful nature of Iran's nuclear program. This is vital for our collective security – in the European Union, in the region and beyond. And this is even more important as we face a nuclear crisis with North Korea.

“With the nuclear deal with Iran, we have established the strongest monitoring system ever set up. The International Atomic Energy Agency has reported nine times that Iran is implementing all its nuclear-related commitments.

“It took us twelve years of extremely difficult negotiations, led by the European Union, to achieve these results. Renegotiating the deal or part of it is simply not an option – no one can possibly in good faith believe that this is a credible way to follow.

“After President Trump’s announcement on a new US strategy towards Iran, we Europeans have made our position very clear. Preserving the deal is our shared security interest, and the best way for the United States to address their security concerns which are also ours, is in close cooperation with us, Europeans.

She said that Iran’s missile program should not be mixed up with the Joint Comprehensive Plan of Action – the nuclear deal - and must be addressed in the appropriate formats and fora. Dismantling a nuclear agreement that is working would not put us in a better position to discuss all the rest – the contrary would happen.

“In fact, this is what we always do in our contacts with Iran. Discussing all the issues we have on the table, from cooperation to the difficult ones, including regional issues. On November 20th we held the latest EU-Iran High Level Dialogue, and as you know, I meet regularly with Foreign Minister [Mohammad Javad] Zarif. For more than two years now, we have built a very frank relationship with Iran: we are always open about our disagreements, and there are many, and we always try to find the best way to address them.

“This approach has also driven our conversations on human rights. We still have substantive disagreements, but together with Iran we have agreed to focus on tangible results.

“We have also agreed to look into possibilities for cooperation on the fight against drugs and on migration. Let me remind us all that Iran has played and continues to play an important role in hosting millions of Afghan refugees and we are ready to increase our common work and support in this field.

“Since we reached the nuclear deal, our engagement with Iran has entered into a new phase, not always easy as I mentioned - there are a lot of issues of disagreements - but definitely a new phase.

“Trade between Iran and Europe increased 94 percent in the first half of 2017, compared to the first half of 2016. Oil exports have reached pre-sanctions level, and billions of outstanding oil debts have been paid back. Foreign Direct Investment is increasing, and the Iranian government reported a growth of 55 percent compared to the previous year.

“Progress in the financial and banking sector has been slower due to a number of factors. But important work is being carried out to improve the situation - also including on the Iranian side.

“Civil nuclear cooperation is also integral part of the deal - and let me stress here, as the debate refers to the Iran nuclear deal, I am focusing here on the implementation of the deal and all the nuclear related parts of it. Obviously, I would be very pleased to have another debate today to address all the issues that are not covered under the nuclear deal, and that are issues that we address and that we believe need to be addressed in our relations and our talks with Iran, I think of the war in Syria, the conflict in Yemen – even if I touched upon some of the bilateral issues we are working on.

“This cooperation is important for us, Europeans, and even more for the people of Iran. And I would like us all to remember the images of young Iranians - girls, boys, but not only young people - celebrating the deal in the streets of Teheran. I believe that we have the responsibility to show these people and the Iranian leadership, that they have an interest in making Iran more open and more cooperative, that this brings benefits to the leadership and to the people - especially to the people. It is their interest, and it is our own interest.

“The deal with Iran prevented a nuclear escalation in the Middle East. It showed that diplomacy is the best way to overcome longstanding problems that sometimes seem impossible to solve. This is something that we have not forgotten. This is why we believe that a diplomatic but critical engagement with Iran can benefit the entire Middle East, and prevent a regional escalation that would destabilize the whole world.

“In this complicated moment for the region and for the world, let me say that the European Parliament has taken part of the responsibility for our collective security and I am grateful for that.