TEHRAN, December 13 - The Organization of Islamic Cooperation (OIC) convenes an urgent summit in Istanbul on Washington’s contentious declaration on Jerusalem al-Quds, with the Turkish foreign minister urging Muslim nations to respond by pressing the world for the recognition of the city as the capital of a Palestinian state. 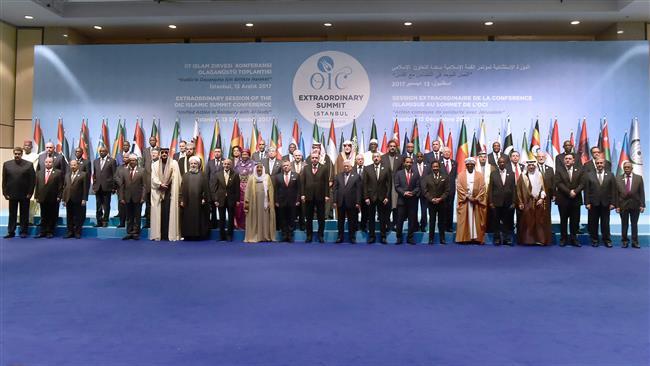 TEHRAN, Young Journalists Club (YJC) - The Organization of Islamic Cooperation (OIC) has invited all nations to recognize Jerusalem al-Quds as the capital of Palestine, blasting the United States for disregarding Middle East peace by moving its Israeli embassy from Tel Aviv to the occupied city.

The declaration was a direct response to US President Donald Trump days after he referred to the city as the "eternal capital" of Israel.

The OIC rejected and condemned "in the strongest terms the unilateral decision by the president of the United States of America in recognizing Jerusalem al-Quds as the so-called capital of Israel, the occupying power."

Renouncing Trump's move as "null and void legally," the OIC members said the decision was tantamount to "an attack on the historical, legal, natural and national rights of the Palestinian people, a deliberate undermining of all peace efforts, an impetus to extremism and terrorism, and a threat to international peace and security."

The OIC reaffirmed its continued commitment to the so-called two-state solution for ending the years-long Israeli-Palestinian conflict. Some speakers, however, said the US was no longer deemed reliable to mediate any peace deal.

OIC members also said they would hold the US responsible for the consequences of the decision.

The communique also denounced Israel's actions and policies against the people of Palestine as “colonial” and “racist.”

Trump has tasked the US State Department with making preparations for the relocation of Washington’s embassy from Tel Aviv to the occupied Palestinian city.

The dramatic shift in Washington’s Jerusalem al-Quds policy has drawn fierce criticism from the international community, including Washington's own allies, while triggering demonstrations against the US and Israel worldwide.

As the second-largest inter-governmental body after the United Nations, the OIC was established during a summit in Rabat, Morocco, in 1969, following an arson attack on the al-Aqsa Mosque in the occupied city.

Shortly after the OIC declaration, Iran's Foreign Minister Javad Zarif hailed Islamic leaders for attending the summit in high capacities, taking an indirect jab at countries like Saudi Arabia and Egypt, which only sent low-level officials.