TEHRAN, December 13 - Republican Roy Moore, an accused child molester running for the US Senate from the deeply conservative state of Alabama, has lost to his Democratic contender Doug Jones. 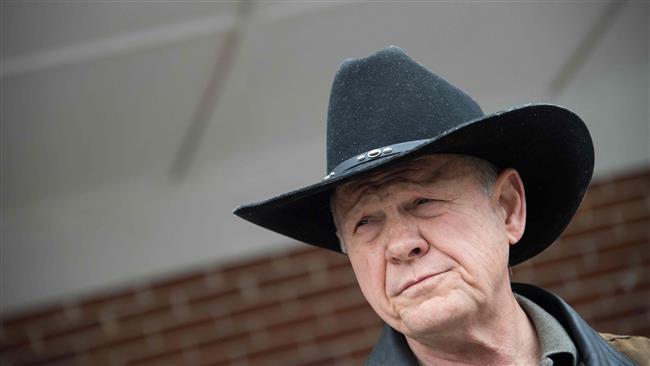 TEHRAN, Young Journalists Club (YJC) - With 92 percent of precincts reporting, Jones secured 49.5 percent of the vote compared to Moore's 48.8 percent, according to CNN and other news outlets.

The vote was the most high-stakes election of 2017 and the upset victory by Jones will trim the Republican Senate majority to just 51 seats in the 100-member chamber.

Jones, a former prosecutor, became the first Democrat to win a Senate seat in the state since 1992.

“We have shown the country the way that we can be unified,” Jones declared. “This entire race has been about dignity and respect. This campaign has been about the rule of law.”

The result also delivered a personal blow to President Donald Trump, who officially endorsed Moore amid the national debate about sexual misconduct.

"The people of Alabama will do the right thing. Doug Jones is Pro-Abortion, weak on Crime, Military and Illegal Immigration, Bad for Gun Owners and Veterans and against the WALL. Jones is a Pelosi/Schumer Puppet. Roy Moore will always vote with us. VOTE ROY MOORE!" Trump tweeted on Tuesday morning.

The president also campaigned for Moore in Florida on Friday night.

The result threatens Trump’s agenda and might open the door for Democrats to retake the Senate in 2018.

Trump on Tuesday congratulated Jones on his victory. "Congratulations to Doug Jones on a hard fought victory," he tweeted.

Congratulations to Doug Jones on a hard fought victory. The write-in votes played a very big factor, but a win is a win. The people of Alabama are great, and the Republicans will have another shot at this seat in a very short period of time. It never ends!

They already have one defector in Senator Bob Corker and Jones’ victory means the legislation would sink if a single additional Republican breaks ranks.

However, Jones’ win may provide some relief to Senate Majority Leader Mitch McConnell and other Republicans, who turned against Moore following allegations that he pursued teenage girls decades ago.

Some Republicans had even floated the idea of expelling Moore from the Senate if he won.

Moore, who was removed from the state Supreme Court in Alabama twice for ignoring federal law, has dismissed all allegations against him as conspiracy by “fake news” media and Democrats.

The former judge, 70, had been favored in the deep red state until two women came forward accusing him of sexually assaulting them when they were teenagers and he was in his 30s.

A number of other women followed suit, alleging that Moore sexually pursued them when they were underage.