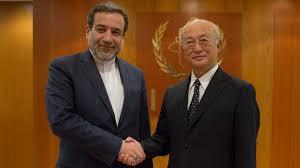 The meeting came after a new meeting of JCPOA joint commission.

During the meeting, representatives of Iran and P5+1 along with Secretary General of European External Action Service Helga Schmid reviewed the process of lifting sanctions on Iran.

They also stressed continuous implementation of lifting sanctions in a way which would materialize the related interests specified in the nuclear deal.

They acknowledged dealing with any challenges in this field through such circles.

Araqchi have also had separate meetings with P5+1 and EU representatives.

Trump delivered an anti-Iran speech on October 13, in which he said he would not be certifying Iran’s compliance with the terms of the JCPOA under a domestic American law, kicking a decision to Congress on whether to restore sanctions against the Islamic Republic.

The US Congress was given until December 12 to decide whether to slap economic sanctions on Tehran anew, but it missed the deadline as congressional leaders announced no plans to introduce a resolution to reimpose sanctions on Iran, passing the ball back to Trump, who must decide in mid-January if he wants to continue to waive sanctions on Iran.

Share to
Related News
Iran to file complaint at UN over US missile claim, pieces will have to be handed over to Iran for inspection
Iran’s Araqchi: Nuclear deal has nothing to do with regional, int’l matters
Iran, P5+1 hold JCPOA commission meeting in Vienna
Tags
Iran ، Araqchi ، Amano
Your Comment