TEHRAN, December 14 - Syria’s ambassador to the United Nations has accused Saudi Arabia and Western states of sabotaging the latest round of peace talks held in Geneva in a bid to end the crisis in the Arab country. 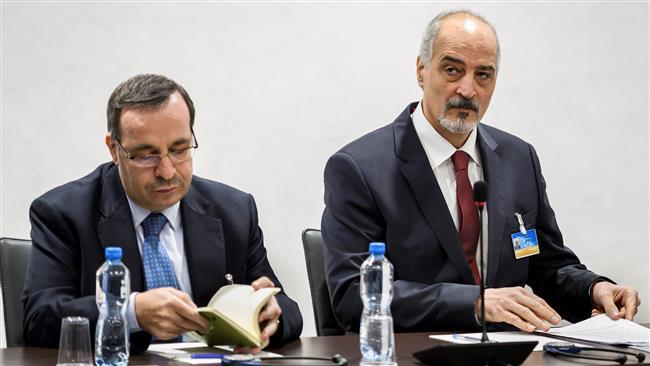 TEHRAN, Young Journalists Club (YJC) - Bashar Jaafari made the remarks on Thursday after the eighth round of the UN-mediated discussions ended without face-to-face talks between representatives of the Syrian government and the opposition.

Jaafari said a statement issued at the Riyadh II conference of the Syrian opposition in November, demanding President Bashar al-Assad's departure before any peace deal in Syria, was a "blackmail of the Geneva process."

The statement was meant to undermine the Geneva process by setting preconditions, he said, adding "those who drew up the Riyadh communiqué are the ones who sabotaged this round" of the Geneva talks.

The head of the Syrian government delegation at the Geneva discussions also noted that his team will not engage in any dialogue with the opposition as long as it insists on Assad's removal.

He further blasted UN Special Envoy for Syria Staffan de Mistura for making an error by his latest comments which could even "derail his mandate."

In a Wednesday interview with Swiss broadcaster RTS, the UN envoy called on Russian President Vladimir Putin to "have the courage" to push the Syrian government to accept new elections and a new constitution.

The Russian leader should "convince the (Syrian) government that there is no time to lose" in efforts to reach peace in Syria, he added.

The Geneva negotiations have failed to achieve tangible results, mainly due to the opposition’s insistence that the Syrian government cede power.

A parallel peace process between Syria’s warring parties in the Kazakh capital, Astana, has resulted in significant achievements instead, leading to ceasefires and the establishment of de-escalation zones across the conflict-ridden country. The Astana talks have been brokered by Iran, Russia and Turkey.