TEHRAN, December 15 - Iran's UN mission has categorically dismissed as "unfounded" US Ambassador Nikki Haley's claim that a missile fired at Saudi Arabia from Yemen last month was supplied by the Islamic Republic. 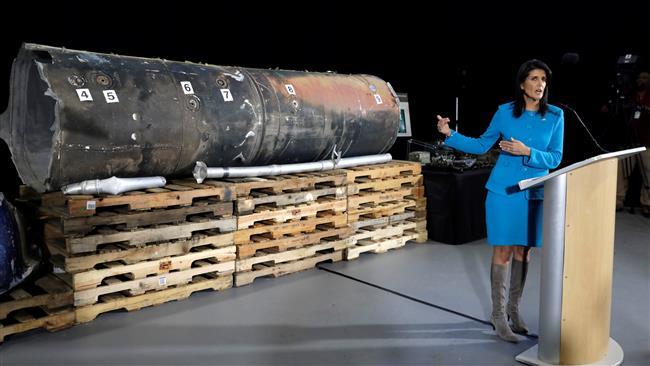 TEHRAN, Young Journalists Club (YJC) - The massive presence of leaders in the urgent meeting of the OrganizaIn a statement released on Thursday, the mission denounced the US allegations as "irresponsible, provocative and destructive," saying "this purported evidence ... is as much fabricated as the one presented on some other occasions earlier."

"These accusations seek also to cover up for the Saudi war crimes in Yemen, with the US complicity, and divert international and regional attention from the stalemate war of aggression against the Yemenis that has so far killed more than 10,000 civilians, displaced three million, crippled Yemen's infrastructure and health system and pushed the country to the brink of the largest famine the world has seen for decades, as the UN has warned," the statement read.

It went on to accuse the US government of being "constantly at work to deceive the public into believing the cases they put together" to advance its agenda.

"While Iran has not supplied Yemen with missiles, these hyperboles are also to serve other US agendas in the Middle East, including covering up for its adventurist acts in the region and its unbridled support for the Israeli regime," the statement read.

It also stressed "the Yemenis' right to self-defense" and reiterated that the conflict in the impoverished country had no military solution.

Speaking to reporters on Thursday, Iranian Ambassador to the UN Gholam-Ali Khoshrou also rejected his American counterpart’s claims and said the “show” Haley put up earlier in the day was merely meant to cover up Washington’s own supply lethal weapons to the Saudi regime, which have resulted in the deaths of Yemeni women and children.

Those “empty and meaningless” accusations, Khoshru said, has nothing to do with Iran, whose stance on Yemen is based on “dialog and peace.”

“Iran wants peace, dialog and an immediate ceasefire and a halt to bombardments” against Yemen, said the senior diplomat, emphasizing that the US “must, above all, end its arms sales to Saudi Arabia.”

Iran's Foreign Minister Mohammad Javad Zarif also took to twitter to compare Haley’s allegations against Iran to those of former US secretary of defense, Colin Powell, who alleged in 2003 that former Iraqi dictator, Saddam Hussein, was hiding weapons of mass destruction in order to make a case for attacking the country.

The anti-Iran accusations come at a time that the US and Saudi Arabia themselves are under fire for secretly providing weapons to the militants fighting the Syrian government.

Conflict Armament Research (CAR), a UK-based organization that monitors the movement of conventional weapons, warned on Thursday that the sophisticated arms given to the so-called Syria militants fell into the hands of the Daesh terrorist group.

The weapons included anti-tank rockets purchased by the US military that ended up in possession of Daesh within two months of leaving the factory, according to the study, which was funded by the European Union and German government.

This came after the UN Secretary-General Antonio Guterres said in a confidential report obtained by AFP on Monday, December 11, that the world body’s team, which visited Riyadh last month to scrutinize the alleged evidence, had not yet established a link between them and the Islamic Republic.

On November 4, a missile fired from Yemen targeted the King Khalid International Airport near Riyadh, reaching the Saudi capital for the first time.

The Houthi movement, which has been fighting back a Saudi aggression, said it had fired the missile but the Riyadh regime was quick to point the finger at Iran.

Tehran rejected the allegations as “provocative and baseless,” saying the Yemenis had shown an “independent” reaction to the Saudi bombing campaign on their country.

Speaking at a press conference at a military base in Washington on Thursday, Haley presented what she claimed to be "undeniable" evidence, including the allegedly recovered pieces of the missile, saying it proved that Iran was violating international law by giving missiles to the Houthis.

"It was made in Iran then sent to Houthi militants in Yemen," she added.

However, a panel appointed by the United Nations Security Council said last month that it had seen no evidence to support Saudi Arabia’s claims that missiles had been transferred to Yemen’s Houthi fighters by external sources.

The Security Council-appointed panel said in its confidential assessment that it had seen no evidence to back up the Saudi claims that short-range ballistic missiles (SRBMs) had been transferred to Yemeni fighters in violation of the Resolution 2216.

It said the tightening of the blockade by the Saudi-led coalition and its invoking of Resolution 2216 had been an attempt to merely “obstruct” the delivery of civilian aid.

“The panel finds that imposition of access restrictions is another attempt by the Saudi Arabia-led coalition to use paragraph 14 of resolution 2216 as justification for obstructing the delivery of commodities that are essentially civilian in nature,” the assessment read.

The Saudi war since 2015, accompanied by the land, naval, and aerial blockade on Yemen, has killed over 12,000 people so far and led to a humanitarian crisis as well as a deadly cholera epidemic.

Saudi Arabia and its allies launched the war in a bid to crush the Houthi movement and reinstate the former Riyadh-friendly regime, but the kingdom has achieved neither of its goals.

The UN has listed Yemen as the world’s number one humanitarian crisis, with 17 million Yemenis in need of food and gripping the country.

The US, which has long been a staunch Saudi ally, signed a deal to sell the kingdom $110 billion in weapons in May.

Share to
Related News
Claim of Iran military aid to Yemen sheer lie: Larijani
Iran strongly condemns Saudi killing of Yemeni women
Iran to file complaint at UN over US missile claim, pieces will have to be handed over to Iran for inspection
Zarif says US accusations against Iran seek covering up Washington’s war crimes in region
Saudis busy killing with US arms during Haley’s anti-Iran show
No alternative facts can cover up US complicity in war crimes
US claim about Iran missile distraction from al-Quds move: Ansarullah
Zarif: US complicity in Yemeni war crimes cannot be covered up
Haley’s missile stunt ‘incredible distraction’ from US, Saudi horrors in Yemen
U.N. does not confirm Iran link to Yemen missiles: report
Tags
Iran ، US ، Yemen ، missile
Your Comment