TEHRAN, December 15 - European Union (EU) leaders have agreed to extend economic sanctions against Russia for another six months over what they say is Moscow’s interference in Ukraine, which is not an EU member. 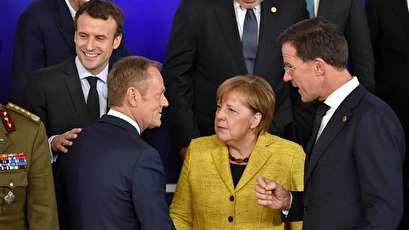 TEHRAN, Young Journalists Club (YJC) -European Union (EU) leaders have agreed to extend economic sanctions against Russia for another six months over what they say is Moscow’s interference in Ukraine, which is not an EU member.

EU President Donald Tusk said in a tweet that the bloc’s members “united on roll-over of economic sanctions on Russia” at a summit in Brussels on Thursday.

German Chancellor Angela Merkel said they had had an “intense discussion” on the measures, but “there is not enough progress in order to end the sanctions.”

The bloc accuses Russia of violating EU-brokered peace deals, known as Minsk agreements, in eastern Ukraine, where there has been an armed conflict between the ethnic Russian-speaking population and the Ukrainian government since 2014.

Tusk’s spokesman, Preben Aamann, also took to Twitter, writing, “3.5 years of economic sanctions on Russia. And more to come because lack of implementation of Minsk Agreements.”

The anti-Russia move was hailed by Ukrainian President Petro Poroshenko, who described it as “an important political decision” on behalf of his country.

“(It is) an important political decision by the leaders of the European Union to continue economic sanctions against Russia for violating Ukraine’s territorial integrity and unwillingness to stop hybrid aggression against our country,” he wrote on his official Facebook page.

Conflict first erupted in eastern Ukraine after people in the Black Sea peninsula of Crimea voted for unification with Russia in March 2014. The West brands the unification as annexation of the territory by Russia. They also accuse Russia of having a major hand in the armed conflict that erupted shortly afterwards in eastern Ukraine. Moscow denies all those allegations.

The pact had been signed by 25 members of the bloc in November to get the states to work more closely and spend money more effectively on defense projects, including the development of new weapons.

Britain, which is leaving the EU, as well as Denmark and Malta did not sign PESCO.

Tusk described the pact as “good news for our allies and bad news for our enemies,” and claimed at the summit that PESCO would also strengthen the North Atlantic Treaty Organization (NATO).

“For many years, the strongest argument against PESCO had been the fear that it would lead to the weakening of NATO,” Tusk said. “But it is quite the opposite — strong European defense naturally strengthens NATO.”

The European Defense Fund, however, would still await final approval for funding, which is 1.5 billion euros a year.

the pact was signed over concerns that the administration of US President Donald Trump may not honor Washington’s longstanding commitment to aid Europe militarily if needed. Trump warned US’s European allies to spend more on defense by the end of this year if they did not want to see Washington moderate its commitment to NATO.