TEHRAN, December 15 - Israel has deployed forces to Jerusalem al-Quds in anticipation of more angry demonstrations following Muslim Friday prayers against an internationally-criticized US declaration on the ancient city. 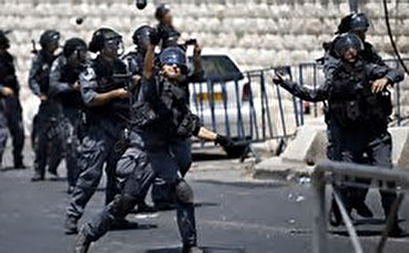 On Friday, the Israeli military dispatched reinforcements across Jerusalem al-Quds and its Old City, which hosts the al-Aqsa Mosque compound.

Palestinians are angry at an announcement on December 6 by US President Donald Trump that Washington was recognizing Jerusalem al-Quds as the “capital” of Israel.

Since then, they have been holding protests against the US and Israel on a daily bases.

Most of the protests have been met with a fierce response by Israeli forces, who use tear gas, rubber bullets and stun grenades to disperse the protesters. The regime’s forces have also made dozens of arrests amid clashes with Palestinians.

In the occupied West Bank and Gaza, Palestinians responded to a call by the Hamas resistance movement to observe a ‘day of rage’ against Israel and the US. Two Palestinians were killed and hundreds of others wounded during clashes with Israeli forces.