TEHRAN, December 15 - Britain's Finance Minister told the Chinese premier there are "many opportunities" for closer commercial ties as he started a visit Friday aimed at developing trade as the UK prepares to leave the European Union. 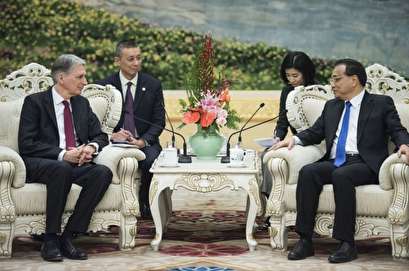 TEHRAN, Young Journalists Club (YJC) - British leaders are looking to China for trade and investment as they try to fashion a new global role and offset reduced access to the European common market. Chinese officials believe a post-Brexit Britain needs China more than ever but its companies are uneasy about the future of a market they see as one of Europe's most welcoming.

Philip Hammond was in Beijing for an annual "economic dialogue" that has taken on added significance this year. He was accompanied by an unusually large delegation of businesspeople and British economic officials for such an event.

Premier Li Keqiang, China's top economic official, expressed confidence in "steady and sound growth" of Chinese-British relations regardless of what happens between London and the EU.

"We see many opportunities to build on our strong relationship," said Hammond in the meeting at the Great Hall of the People in central Beijing, the symbolic seat of China's government.

Both governments have declared themselves to be in a "Golden Era" of relations. They say they want closer cooperation in finance, clean energy, nuclear power and other fields.

Britain needs to diversify its trade "and China is regarded as a potential replacement for the EU in this regard," said Wang Zhanpeng, director of the British Studies Center at the Beijing Foreign Studies University.

China had hoped Britain would be a partner inside the EU, helping to resist pressure in the bloc to restrict imports, said Wang. But he said the uncertainty of Brexit might hurt Britain's image as a stable and welcoming market.

"If the impact of Brexit lasts for a long time, it may bring about negative effects on China's investment and acquisitions in the country," said Wang.

Hammond's delegation includes Gov. Mark Carney of the Bank of England, the chief executive of the London Stock Exchange and Britain's secretaries of international trade and business and energy. They are accompanied by executives from banks Barclays, HSBC and Standard Chartered, engineering firm Arup and British law firms.

The sides plan to conclude agreements on more than 1 billion pounds ($1.3 billion) of trade and investment deals during the event, according to Hammond's statement. It gave no details.

Beijing announced in November it will allow 100 percent foreign ownership of Chinese banks, securities firms and insurers for the first time — a move that could be boon to Britain's financial industries.

Business groups said, however, it might be too late for foreign institutions to get more than a sliver of a market dominated by China's state-owned banks. They said potential investors need to details before they can know whether that will be commercially attractive.

This weekend, the two governments also plan to discuss expanding cooperation in industrial strategy, according to Hammond. The business and energy secretary, Greg Clark, said they would discuss cooperation in renewable energy.

Britain also wants to talk about a possible role in Beijing's "Belt and Road Initiative," an ambitious project aimed at expanding trade across Asia to Europe by building railways and other infrastructure.

British Prime Minister Theresa May got off to a rocky start with Beijing after taking office in 2016 when she abruptly launched a review of the Hinkley Point C nuclear power project in which China is an investor along with French utility EDF.

May and Chinese President Xi Jinping affirmed their desire for closer ties during a meeting in July at the gathering of leaders of Group of 20 major developed and emerging economies in Hamburg, Germany.