TEHRAN, December 15 - Turkish President Recep Tayyip Erdogan said his country is launching an initiative at the United Nations to annul the recent “disgraceful” decision by US President Donald Trump to recognize Israeli-occupied Jerusalem al-Quds as the capital of the Tel Aviv regime. 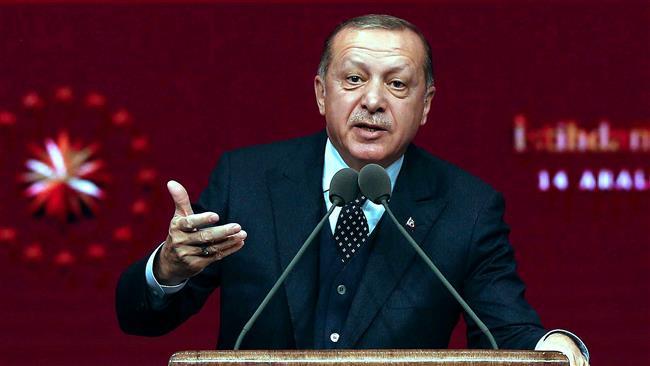 TEHRAN, Young Journalists Club (YJC) - “We, as Turkey, are determined to perform our duties on this issue. We will stand up against those who breach international law. We will work to annul this unlawful decision, first in the Security Council and then in the UN General Assembly, if it is vetoed there,” Erdogan addressed a rally in the central province of Konya via teleconference on Friday.

He stated that Washington had violated the 1980 UN Security Council decision on Jerusalem al-Quds, stressing that “no country was above the law.”

Erdogan went on to say that Muslims “would never give in to such double standards and injustice,” adding that Ankara was also launching initiatives to make other countries recognize the Palestinian state.

“Right now, 137 countries in the world recognize the Palestinian state. God willing, this number will further increase with our efforts,” he said.

The Turkish president also made a reference to Wednesday's summit of the 57-member Organization of Islamic Cooperation, which declared occupied East Jerusalem al-Quds the capital of Palestine and urged the world to recognize the state of Palestine.

On Sunday, violent clashes erupted outside the US embassy in the Lebanese capital city of Beirut during a protest against the US president’s decision. Demonstrators burnt tires as well as the US and Israeli flags as they pushed to break through a barbed wire erected by security forces around the embassy complex.